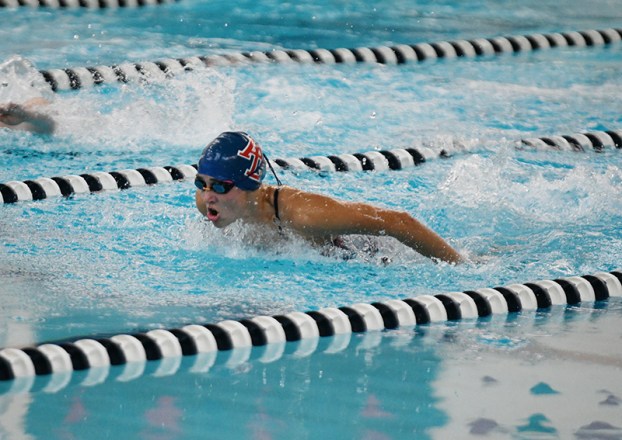 Albert Lea senior Taya Jeffrey swims in the 100-yard butterfly Tuesday night in the meet against Tri-City United. Jeffrey won the event with a time of 1:14.38. - Tyler Julson/Albert Lea Tribune

After some narrow losses last week, the Albert Lea girls’ swim and dive team hosted Tri-City United Tuesday night in search of its first win of the season.

The Tigers came away with eight first-place finishes in 12 varsity events to put away the Titans and win the meet, 87-66.

Albert Lea started the night off in the right way with the 400-yard medley relay team of freshman Hailey Deming, sophomores Emery Brouwers and Hatty Adams, and senior Brooke Hanson won the event with a time of 2:11.02, more than 24 seconds faster than the second-place team. 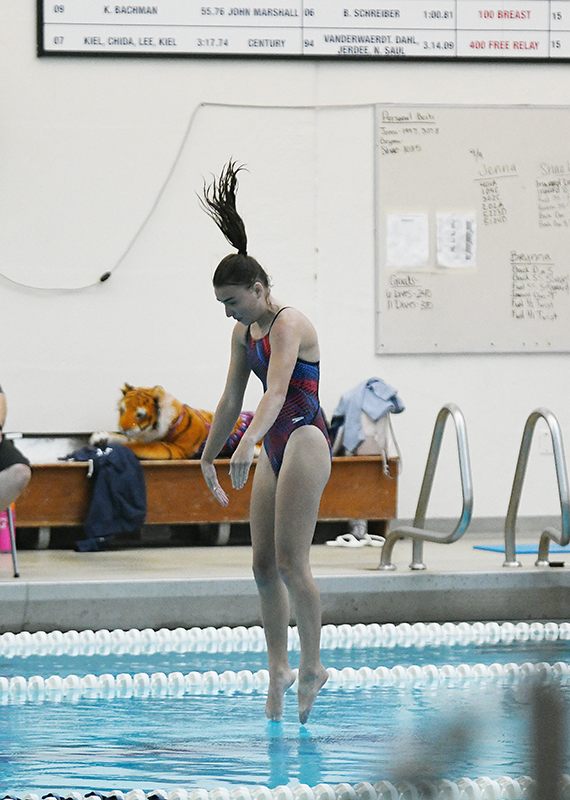 Albert Lea senior Jenna Steffl points her toes into the water just before making entry on one of her dives in the one-meter diving comppetition. Steffl won with event with a final score of 188.40. Tyler Julson/Albert Lea Tribune

Senior Jenna Steffl dominated the one-meter diving competition with a final score of 188.40. Freshman Shaelee Lambertson also competed in the event, finishing in fifth place with a score of 109.90.

After a short break for Chuck-A-Duck and a quick warmup, the Tigers were back in the pool with Jeffrey recording her second victory of the night, winning the 100-yard butterfly with a time of 1:14.38. Adams came in second with a time of 1:20.87.

In the penultimate relay event, the team of Jeffrey, Rognes, Hanson and Brouwers won the 200-yard freestyle relay with a time of 1:55.80.

The Tigers now improve to 1-2 on the season and will be back in the pool Thursday when they travel to take on the Wingers of Red Wing. Their next home meet is scheduled for Sept. 23 against Faribault.