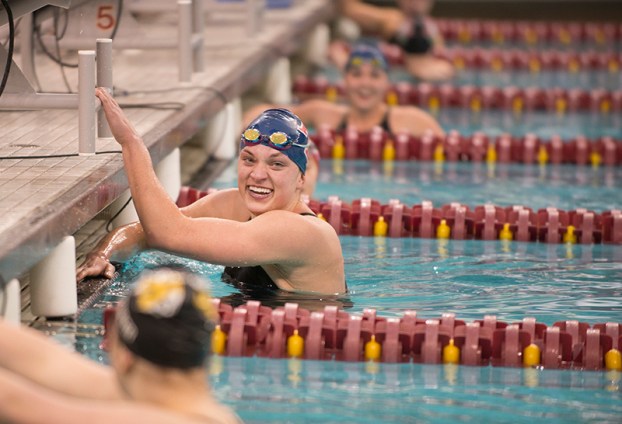 Lindsey (Horejsi) Kozelsky pauses to celebrate after breaking the national high school record in the 100-yard breaststroke with a time of 58.56 seconds in 2015 in the girls’ Class A state swimming prelims at the University of Minnesota Aquatic Center. - Colleen Harrison/Albert Lea Tribune

Albert Lea High School graduate Lindsey (Horejsi) Kozelsky competed Thursday on day five of the Olympic Trials, starting off the day in the morning’s preliminary session of the 200 meter breaststroke.

She started the second of seven heats off as hot as she possibly could, outpacing the rest of her field at each wall to comfortably finish with the top time of the race (2:29.85).

The time remained the fastest of the morning through the first four heats, before it was bested in the final three to drop her final seeding to 13th entering the night’s semi. In the night’s semi, Kozelsky would hold that same spot, dropping nearly a full second to finish in a time of 2:28.78 for a 13th-place finish overall.

Kozelsky also attempted to qualify on Monday for the 100-meter breaststroke, finishing in 33rd place with a time of 1:09.94.

The Albert Lea graduate has been swimming competitively for the DC Trident in the International Swimming League in Budapest, Hungary.