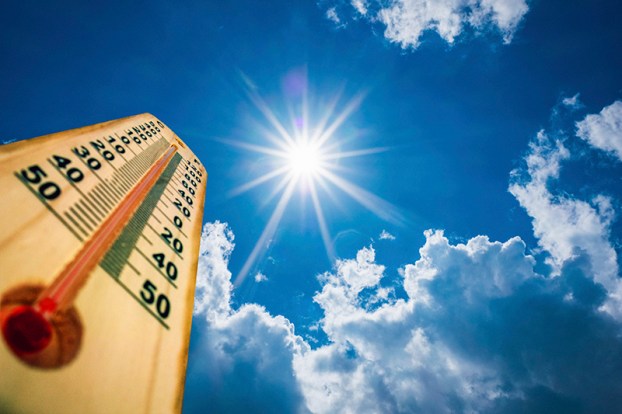 Excessive heat will continue into today with heat indices of between 95 to 100 degrees expected.

According to the National Weather Service, temperatures will be in the lower 90s, with the most oppressive heat in the late morning to early afternoon.

People are advised to drink plenty of fluids, stay in an air-conditioned room, stay out of the sun and check up on relatives and neighbors. People and pets should never be left unattended in vehicles under any circumstances.

The National Weather Service states there is a 30% chance of showers and thunderstorms, mainly after 1 p.m. Some storms could be severe, with damaging winds.

After that, no rain is forecasted over the next week.

According to the weather agency, the heat wave currently over Minnesota is of historic duration and intensity, with warm air arriving June 3 from a southerly flow that developed between an area of low pressure over the Rockies and a large area of high pressure in the southeastern United States.

“With neither weather system moving much, the southerly winds maintained a steady feed of hot, and eventually humid air into the region,” the Weather Service stated.

Temperatures rose into the 90s across the entire state, with some areas reaching 100 degrees. Adding into the picture high humidity levels this week, and heat indices creeped even higher.

“Minnesota has had many historical heat waves that were ‘worse’ than this one on numerous counts,” the Weather Service states. “However, at many locations, this was the longest and most severe heat wave to occur so early in the season. It’s not unusual (to) have several days or more of 90-degree weather during the middle of July, but it is unusual to do so during (or before) the first half of June.”

New record highs were reported in St. Cloud and the Twin Cities on Wednesday with 94 and 96, respectively.

Record highs were broken at all of Minnesota’s five major climate stations — in Duluth, International Falls, Rochester, St. Cloud and the Twin Cities — on June 4 and at several of the stations since.