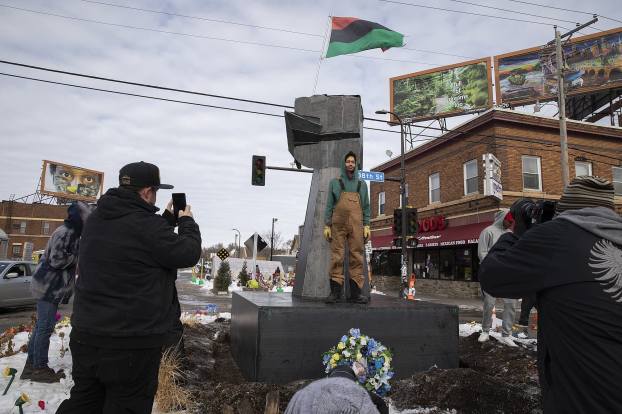 Artist Jordan Powell Karis stands in front of the steel fist sculpture that was installed in January at the intersection of 38th and Chicago in Minneapolis. Christine T. Nguyen/MPR News

MINNEAPOLIS — City crews returned early Tuesday to a Minneapolis intersection where a memorial to George Floyd was assembled after his death last year and worked to reopen it to traffic by removing debris and makeshift barriers, only to have activists barricade the area again.

Workers using front-end loaders and brooms arrived just before 5 a.m. and cleared the intersection where Floyd was killed, which is informally known as George Floyd Square, the Minneapolis Star Tribune reported.

The intersection has been closed to traffic since Floyd’s death on May 25, 2020, and some residents and businesses have expressed frustration that it has been closed for so long.

As soon as workers left the area on Tuesday, activists moved back in, again blocking traffic with parked cars, trash cans, traffic signs and other items in a repeat of last Thursday’s scene.

The tribute at the square sprang up organically in the days after Floyd’s death. As people gathered to express their grief and anger, community members set up makeshift barricades to block traffic, which the city eventually replaced with concrete ones.

Mayor Jacob Frey and other city leaders pledged to reopen the intersection, but activist leaders have said they won’t step aside unless the city meets their 24 demands.

Among them: recall the county prosecutor, fire the head of the state’s criminal investigative agency, and spend hundreds of thousands of dollars on programs to create jobs, combat racism and support affordable housing.

City officials didn’t immediately respond to an email Tuesday seeking comment on the activists closing down the intersection again.

Former Minneapolis police Officer Derek Chauvin was convicted in April of second-degree unintentional murder, third-degree murder and second-degree manslaughter for pressing his knee against Floyd’s neck for about 9 1/2 minutes as he pleaded for air.

Chauvin has also been indicted on federal charges alleging he violated Floyd’s civil rights, as well as the civil rights of a 14-year-old he restrained in a 2017 arrest.

The three other former Minneapolis officers involved in Floyd’s arrest and death were also charged with federal civil rights violations. They await trial in state court on aiding and abetting counts.