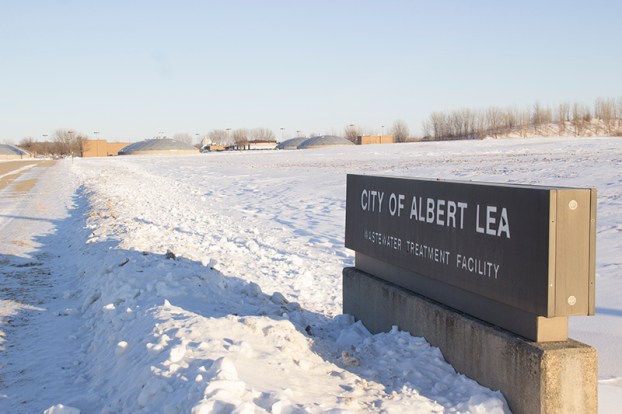 The Albert Lea City Council on Monday approved a letter supporting the city’s request for $30 million in state bonding funds to go toward the expected $60 million upgrades needed at the city’s wastewater treatment plant.

The plant treats the wastewater from the entire city and then discharges the treated water to the Shell Rock River. The city has a permit with the state of Minnesota that dictates the standards the water must meet prior to discharging.

City Manager Ian Rigg said during the regular council meeting that new regulations have required the Minnesota Pollution Control Agency to include phosphorous limits in the city’s national pollutant discharge permit for protection of the environment. To meet those standards, significant infrastructure updates will be needed at the plant.

Rigg said the original facility was constructed in 1983, and several components of the treatment plant need updated or replaced to support community industry, meet new limits, protect the environment and provide sustainable wastewater treatment for area residents and businesses, he said.

Without state assistance, the costs of the improvements would have a significant negative economic impact on residents, industries and business that rely on the treatment plant.

“This is the single biggest issue that’s been facing this community for quite some time, and moving forward with getting these bonding funds is paramount importance for us as a community to be able to stay competitive and move forward,” Albert Lea Mayor Vern Rasmussen Jr. said, noting he was looking forward to working with the local legislators to obtain the funds.

• Awarded a contract to Larson Contracting Central LLC of Lake Mills for almost $1.6 million for excavation and disposal of contaminated soil on the Blazing Star Landing, where a new apartment complex is expected to be constructed. The project also includes importing clean soil to the site.

The city was awarded a $1.4 million grant from the Minnesota Department of Employment and Economic Development to assist in cleanup of the contaminated soils. Albert Lea City Engineer Steven Jahnke previously stated the contamination is believed to have been from a coal ash pile that Wilson & Co. previously had on the southern portion of the property.

• Authorized a grant agreement with the Minnesota Department of Transportation for an improvement project at the city’s airport.

Approximately 1,572 feet of chain-link fence will be relocated on the west end, about 215 outside of the current space to meet new safety regulations. Some tree obstructions will also be cleared south and west of the runway.

Work will be completed in the fall. Three disc golf holes will need to be relocated at the nearby course.

• Approved a resolution supporting a grant application to the Minnesota Housing Owner Rehab Loan Program. The program would provide financing to low- to moderate-income homeowners needing repairs on their property.

Rigg said construction activities including adding green space and new bituminous are scheduled to begin this month and in July.

He noted that included in the development agreement was the issuance of a pay-as-you-go tax increment finance note not to exceed $750,000.

• Approved a three-year contract with Energis Inc. of Green Bay, Wisconsin, for $92,219 for high voltage equipment maintenance and testing required at the wastewater treatment plant.

• Authorized the final payment to Heitmeier for the extension and installation of city water and sewer to the Stables area.

• Approved the upcoming donation of the new Marion Ross statue to the city at the corner of Broadway and Marion Ross Street.

The statue of the “Happy Days” actress will be unveiled July 2. The statue was fundraised for by local residents.