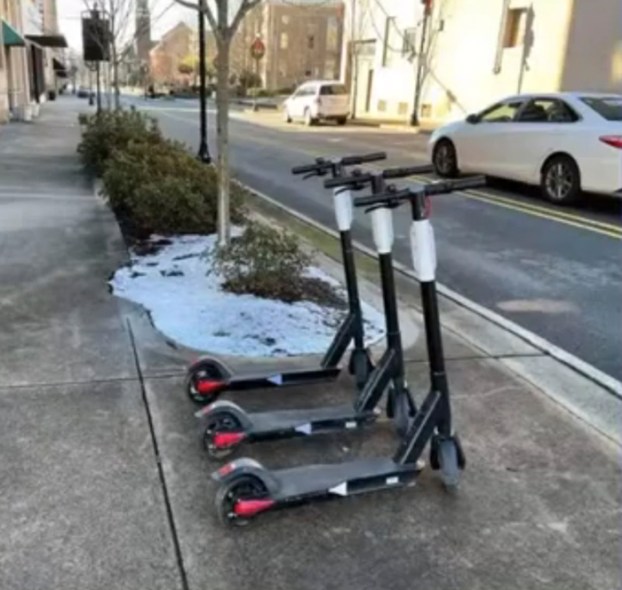 Bird, a stand-up electric vehicle sharing company has proposed bringing 50 to 75 of its rental scooters to Albert Lea. Provided

A stand-up electric vehicle sharing company is looking to bring 50 to 75 of its rental scooters to Albert Lea in the coming weeks.

The company, Bird, was created in 2017 to make cities more livable, bring communities together and provide eco-friendly transportation to members of communities, said Mike Butler, a representative with the company, in a presentation to the Albert Lea City Council on Monday.

He said Bird was the first company to have shared electric scooters and now is in 150 cities across the globe, including multiple continents.

To utilize one of the scooters, Butler said, people walk up to one parked in a designated area and utilize a smartphone app to unlock and then pay for a ride. Riders, who must be over 18, sign a user agreement and go through educational tutorials and then would be allowed to ride within a designated operating zone approved by the city and Bird. At the end of the ride, the rider must park the scooter upright out of the way of pedestrians and take a photograph showing how the scooter is parked.

The app, he said, can enact slow zones or no-ride zones, and once a scooter enters one of those zones it will automatically slow down or come to a slow halt.

Riders would pay $1 to unlock the vehicle and then a charge for every minute of their ride — typically an average of $6 to $8 per ride. Discounts are available to low-income riders for those enrolled or eligible for a government assistance program, and credits are also available to people who park correctly, who wear helmets and follow other guidelines.

He said Bird would work with a person at an interested local business to manage the scooters and make sure they are orderly, tidy and operational — likely a full-time job. Bird would provide data to the city about how the electric vehicles are used, including traffic patterns.

Butler said the company’s scooters are in both large and small cities, and the company recently signed an agreement with the city of Grand Rapids and has made proposals in Stillwater and Marshall as well.

Albert Lea City Manager Ian Rigg said if the council was on board with the idea, he could prepare a memorandum of understanding between the city and Bird that could likely be approved at the council’s next meeting April 26. Staff would also need to look at the city’s ordinance to make sure no changes needed to be made.

Albert Lea Mayor Vern Rasmussen Jr. said he thought the scooters would be a great opportunity for Albert Lea and said he saw it as something people might even come to town to use.

“I’m really excited about this opportunity, and I look forward to entertaining this idea,” he said.