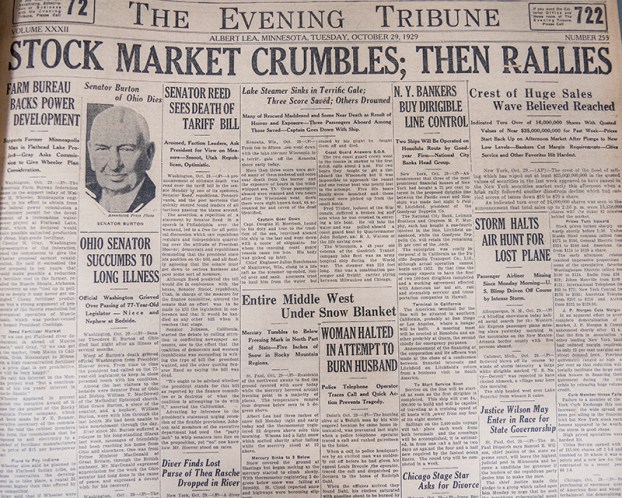 March 22, 2011: The Waseca County Sheriff’s Office responded to a call of a pipe bomb in a ditch in New Richland Township. The Bloomington Bomb Squad was called and detonated the bomb without any injuries.

March 26, 1971: Pat Fitzgerald and wife, Ev, were pictured in The Evening Tribune at Eddie’s Bar. Fitzgerald had recently purchased the bar from Eddy Dombrowski who had owned the establishment for 34 years.

1915: The U.S. Navy lost its first commissioned submarine as the USS F-4 sank off Hawaii, claiming the lives of all 21 crew members.

1931: In the so-called “Scottsboro Boys” case, nine young Black men were taken off a train in Alabama, accused of raping two white women; after years of convictions, death sentences and imprisonment, the nine were eventually vindicated.

1947: A coal-dust explosion inside the Centralia Coal Co. Mine No. 5 in Washington County, Illinois, claimed 111 lives; 31 men survived.

1954: RCA announced it had begun producing color television sets at its plant in Bloomington, Indiana.

1963: Private pilot Ralph Flores and his 21-year-old passenger, Helen Klaben, were rescued after being stranded for seven weeks in brutally cold conditions in the Yukon after their plane crashed.

1965: The Rev. Martin Luther King Jr. led 25,000 people to the Alabama state capitol in Montgomery after a five-day march from Selma to protest the denial of voting rights to Blacks. Later that day, civil rights activist Viola Liuzzo, a white Detroit homemaker, was shot and killed by Ku Klux Klansmen.

1987: The Supreme Court, in Johnson v. Transportation Agency, ruled 6-3 that an employer could promote a woman over an arguably more-qualified man to help get women into higher-ranking jobs.

1988: In New York City’s so-called “Preppie Killer” case, Robert Chambers Jr. pleaded guilty to first-degree manslaughter in the death of 18-year-old Jennifer Levin. (Chambers received 5 to 15 years in prison; he was released in 2003 after serving the full sentence.)

1990: 87 people, most of them Honduran and Dominican immigrants, were killed when fire raced through an illegal social club in New York City.

2016: A suicide bomber believed to be a teenager blew himself up in a soccer stadium south of the Iraqi capital, killing 29 people and wounding 60. The Rolling Stones unleashed two hours of thundering rock and roll on an ecstatic crowd of hundreds of thousands of Cubans and foreign visitors in Havana; the free concert came two days after President Barack Obama concluded his historic visit to Cuba.

2020: The Senate unanimously passed a $2.2 trillion economic rescue package steering aid to businesses, workers and health care systems engulfed by the coronavirus pandemic; the largest economic relief bill in U.S. history included direct payments to most Americans, expanded unemployment benefits and $367 billion for small businesses to keep making payroll while workers were forced to stay home. The number of U.S. deaths from the pandemic topped 1,000. Spain’s death toll rose past 3,400, eclipsing China’s, after a one-day spike of 700 fatalities. Royal officials said Britain’s Prince Charles had tested positive for the coronavirus.