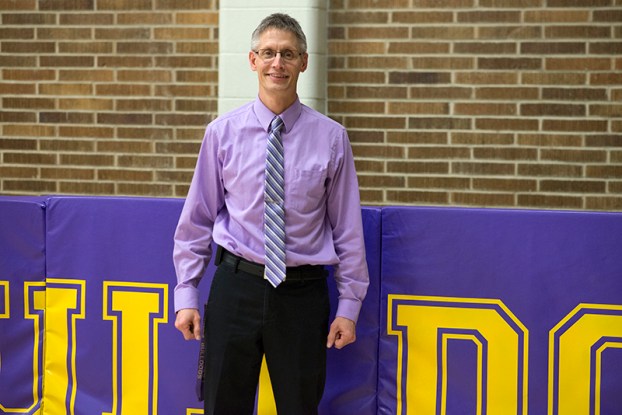 Jim Boehmer has been the Activities Director at Lake Mills for 20 years. Tyler Julson/Albert Lea Tribune

Lake Mills Athletic Director Jim Boehmer has been widely regarded by his colleagues as one of the best athletic directors in North Iowa for much of the past two decades.

His work was finally recognized at the state level.

“For people that have rowed your boat with you, they know and recognize your efforts – that is special,” Boehmer said. “To me, it’s certainly a highlight of my professional career because of the sacrifice it takes.”

Boehmer has worked as an athletic director in some capacity at Lake Mills for 20 years and has worked in the district for 30 years. He’s also been a successful head volleyball coach for the Bulldogs since 1992.

Outside of his work in the Lake Mills district, he’s also involved at the state level. He served as the IHSADA president in 2013-14 and is a current board member of the Iowa Girls High School Athletic Union.

Boehmer was selected as the award winner in February of 2020, but was unable to earn the recognition last spring due to COVID-19. He’s one of only two Class 1A athletic directors since 1974 who have ever received the honor.

“He’s just very detailed and very organized,” Lake Mills boys basketball coach Kyle Menke said. “I’m not at all surprised that he won this award because of that commitment and that organization. He’s someone that definitely plans ahead and he’s very deserving of the honor.”

The job of athletic director can often be a thankless job. According to Boehmer, he’s missed many of his own kids’ games and family events for various games or meets.

However, he does enjoy his job.

“Really I just fell in love with it,” Boehmer said. “I’ve been at Lake Mills for my entire 30 year career at this point. It just quickly became home and I’ve always wanted to find new ways to try to help benefit the community. The AD role allows you to do that.”

When the boys basketball and wrestling teams both made trips to Wells Fargo Arena this winter, Boehmer relished in the moment and enjoyed “riding their coattails.”

“I feel like I get to be involved in a more integral and important role of every sports program, and to me that’s special,” Boehmer said. “Because I really appreciate the time and commitment that our coaches put in. To feel like I’m part of the coaching staff is very rewarding.”

In 2020, the Bulldog boys basketball team made it to the state tournament for the first time since 1986. It was also Menke’s first time as a coach leading the program to Des Moines.

“I definitely leaned on him throughout that week of preparation,” Menke said. “I had all kind of questions for him. He definitely was willing to help me get as prepared as I could be for that experience down at state. He just does a really good job.”

The celebration of winning the honor of top athletic director in the state will be short-lived, as the spring season is kicking up. Of course, Lake Mills will be busy with hosting track and field meets and golf tournaments.

But that’s why Boehmer loves the job. Every days is about creating more opportunities for his student-athletes to succeed. There’s always more work to be done.

And you can count on Boehmer to do it.