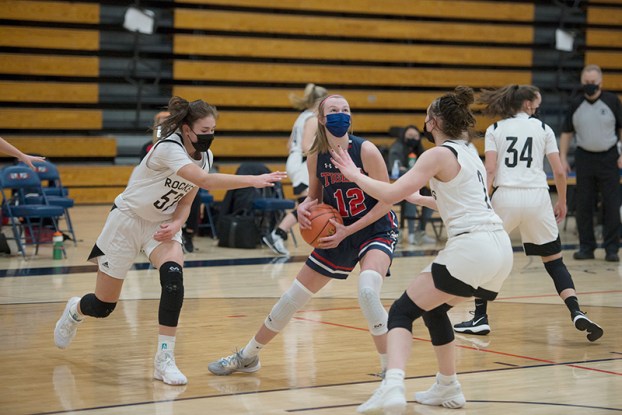 Albert Lea junior Jordan Juveland fights to go up strong with the ball Tuesday night at home against Rochester John Marshall. Juveland had 20 points and 10 rebounds in the loss to the Rockets. Tyler Julson/Albert Lea Tribune

The Albert Lea girls’ basketball team got a couple of big performances from two key players in the home opener against Rochester John Marshall.

Juniors Taya Jeffrey and Jordan Julveland each recorded double-doubles against the Rockets, but the Tigers ended up coming up just short in the long  run, 56-46.

Albert Lea started the game on a solid note, going on an 8-2 run to open play. Three different Tigers scored in the run, using long, drawn-out possessions with smart passing to find open shots. Juveland, Jeffrey and sophomore Kendall Kenis all scored in the opening minutes.

The Rockets started to form a small comeback; however, the Tigers were ready for it, holding the Rockets at bay until midway through the half. John Marshall went on a small run around the eight-minute mark and tied the game 14-14, forcing the Tigers to call a timeout with 6:49 left in the half.

John Marshall came out of the timeout and took the saying “live and die by the three ball” to a whole new level. The Rockets hit two three-pointers before the timeout to tie the game, and proceeded to come out and hit two more to take a 23-16 lead. 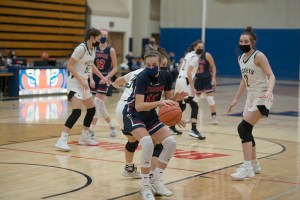 Not to be outdone, the Tigers countered with some physical defensive play and nice moves under the basket to go on a 7-0 run to close out the half.

Juveland led all scorers at the half with 11 points, as the Tigers went to the locker rooms with a 25-23 lead.

Albert Lea extended its lead right away in the second half. However, the Rockets started to get hot from beyond the arc once again, hitting four more threes over the next several minutes of play. To the Tigers’ credit, they stuck with the Rockets through their three-point barrage, only trailing by four points with just about 10 minutes of play remaining.

The teams traded buckets over the next few possessions, with John Marshall calling a timeout leading 44-39 with 8:08 remaining.

John Marshall started finding open players under the basket for easy layups while Albert Lea now found itself struggling to find the open shots it needed to stay in the game.

Eventually the Rockets became too much for the Tigers and pulled away to win the game by 10 points.

The Tigers move to 0-4 on the season, but of all four losses, none of them have been by more than 10 points.

Albert Lea will be back in action Friday when they host the Huskies of Owatonna.