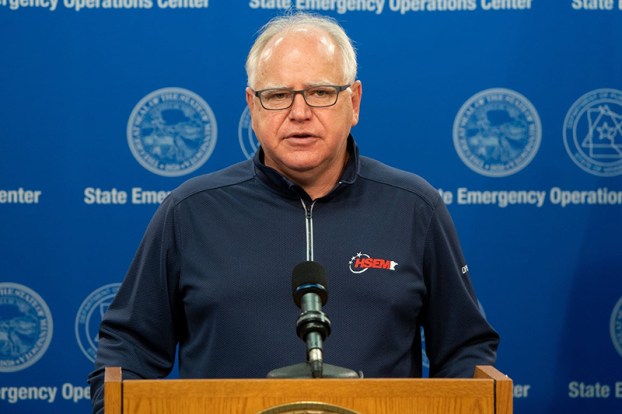 A new poll of Minnesota voters finds that a strong majority approves of the way Gov. Tim Walz is doing his job, even though his support has slipped since the early days of the coronavirus pandemic.

Overall, 57 percent of those polled approve of the job Walz is doing. That’s down from 65 percent in the last Minnesota Poll back in May. The new poll found that 36 percent disapprove, and 7 percent aren’t sure.

Debbie Stillman, a poll respondent from Hopkins, said she thinks Walz has done a good job and based his decisions on COVID-19 on solid data.

“There’s really the opportunity to use science and data to do our best,” Stillman said. “That doesn’t mean there won’t be decisions that will be made that in hindsight you’ll be able to point to a mistake. But at the time, to protect the most Minnesotans at the opportune time, I think he’s doing a really good job of using the data that way.”

Walz has faced relentless criticism from Republican legislators over his handling of COVID-19. They are particularly critical about the emergency powers he first invoked in March which are still in effect. The debate has played out monthly in a series of special sessions needed for Walz to extend the emergency for another 30 days.

Walz is not up for reelection until 2022.

Ryan Pond, a poll respondent from Lakeville, said he believes Walz has abused his power and failed as a leader.

“Where do we start?” Pond asked. “I think he’s mismanaged many things the last little bit, from the downtown riots to his mask mandating and his trying to shut down the economy around Minnesota. With everything that’s going on, I think he has made a bad situation worse.”

Walz is seeing his strongest approval in Hennepin and Ramsey counties, where it reached 72 percent. In southern Minnesota he was at 57 percent. But in northern Minnesota, where he has faced additional criticism over issues including copper-nickel mining and oil pipelines, his approval sagged to just 46 percent. Disapproval in the north was 48 percent.

Walz has spent much of his time this year addressing COVID-19, but the poll found Minnesotans are divided in their concern.

Fifty-one percent were somewhat or very worried about becoming seriously ill from the coronavirus, up 7 points from four months ago. And 49 percent were either not too or not at all worried.

Ronald Johnson, who lives in Excelsior, is among those who are not fretting about COVID-19.

Johnson said he doesn’t know anyone with the virus, but Fernando Alimeda, a poll respondent from Minnetonka, said he has lost two cousins to COVID-19.

“I’m 52 and kind of healthy. But I know that if I get it, probably, I will suffer more than a 25-year-old guy or something,” Alimeda said. “So, yes. As soon as a vaccine is available, I will line up to take the vaccine, along with my family and friends.”

The poll of 800 randomly selected registered voters was conducted by telephone by Mason-Dixon Polling & Strategy from Sept. 21 through Sept. 23. The margin of error is plus or minus 3.5 percentage points.