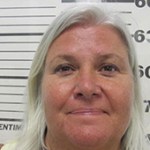 KASSON — A Minnesota woman who earlier pleaded guilty to killing a woman in Florida was sentenced to life in prison without parole after pleading guilty Tuesday to killing her husband before going on the run.

Lois Riess, 58, of Blooming Prairie, was sentenced after pleading guilty to first-degree murder in the March 2018 fatal shooting of her husband, David Riess, at their southern Minnesota home.

Lois Riess was returned to Minnesota last month after pleading guilty to killing Pamela Hutchinson in Florida. Authorities alleged Riess targeted Hutchinson because they looked alike and Riess intended to steal her identity.

She received a life sentence in December after pleading guilty to first-degree murder in Hutchinson’s death.

In court Tuesday, Riess apologized to her husband’s friends and family, saying life without her husband is her true sentence and that she should not have killed him.

After her husband’s death, Riess drove to Florida, befriended Hutchinson and fatally shot her at a Fort Myers Beach condo the following month, according to prosecutors.

With her head of white hair, Riess garnered national attention as the “fugitive grandma” before she was captured in April 2018 in Texas.

Local Girl Scouts busy in the community despite the pandemic

Minnesota woman who lied to support family gets full pardon

1 taken to hospital after crash and other reports