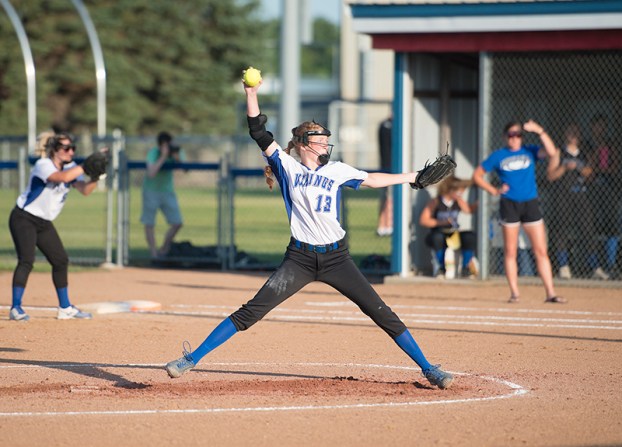 NORTHWOOD — The Northwood-Kensett softball team hosted North Iowa Monday night in the first round of the Class 1A Region 4 tournament.

Despite falling into deficit on three separate occasions, the Vikings battled back to defeat the Bison in a walk off wild pitch.

The Bison jumped out to a quick 1-0 lead in the first inning  with the Vikings failing to match the run in the bottom half of the inning.

The Northwood-Kensett defense held strong in the second and third innings allowing just one base runner. However, the offense was unable to capitalize  getting one runner on base in each inning. 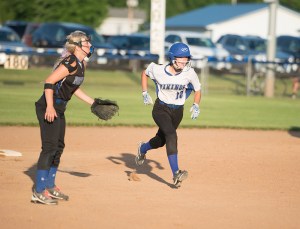 Sophomore Carly Hengesteg makes a break for third base in Monday night’s game against the Bison. Tyler Julson/Albert Lea Tribune

After the Bison added another run in the fourth inning, the Vikings tied the game with two runs in the bottom of the fourth. Junior Kayla Senne reached base on a lead off single and senior Peyton Pangburn was walked in the next at bat. Senne scored on a passed ball and Pangburn followed after a throwing error by the catcher.

North Iowa broke the tie in the top half of the next inning by scoring two runs on a two-RBI single. Northwood-Kensett battled back, however, with sophomore Addy Bachtle scoring on a single from senior Jaela Parks. The score was knotted back up two at bats later when Pangburn laid down a sacrifice bunt that scored sophomore Carly Hengesteg.

Again, the Bison took the lead back in the next half inning scoring two runs in the sixth and another in the seventh.

With only three outs remaining, the Vikings needed three runs to extend the game or four wins to win it. Things were going the Vikings’ way early when Bachtle reached on a single and Hengesteg reached on an error.

After a strikeout recorded the first out of the inning, Senne hit into a fielder’s choice that scored Bachtle and cut the lead to two runs.

Now, only one out was between the Vikings and the end of their season. Pangburn was walked which put a runner at first and second. In stepped freshman Teagan Johnson, who ripped a single and scored Senne. Eighth grader Lindsey Moore was brought in to run for Johnson.

A wild pitch with Pangburn at third brought her around to tie the game 7-7 and the winning run at third base.

Again, a wild pitch escaped the catcher and Moore came in to secure a roller coaster win for the Vikings.

The Vikings move to 5-7 on the season and move into the second round of the regional tournament. They will take on the 9-6 Saints of St. Ansgar Wednesday night at home.