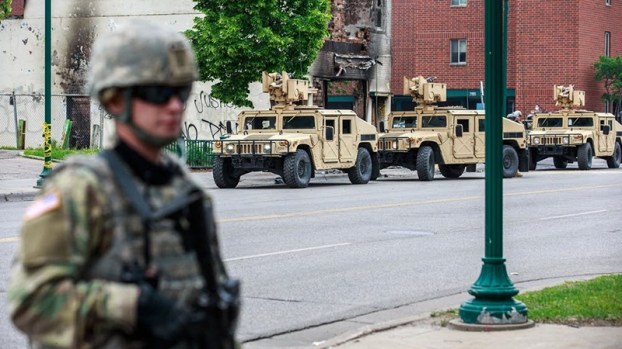 It was the Minnesota National Guard’s largest deployment since World War II, and it occurred with remarkable speed and, fortunately, few injuries or incidents.

The Guard’s leader, Maj. Gen. Jon Jensen, offered the most detailed account yet Thursday of the hurried mission to help contain Twin Cities riots in late May and early June.

In the Guard’s history, there have been only five deployments to help with protests or unrest during labor strikes — but none was even close to this big.

Jensen testified to a Senate committee holding a series of hearings about what unfolded in the days after George Floyd was killed by Minneapolis police. He recounted first being put on alert by Public Safety Commissioner John Harrington of a possible deployment two nights after Floyd died.

Mostly peaceful protests had grown more tense by the hour. Jensen said an initial plan to ready a couple hundred Guard members by that final weekend in May — when huge protests were expected — changed quickly.

“I woke up Thursday morning to a text from Commissioner Harrington. I believe it was 6:35 a.m. Thursday morning, saying we’re going to need to accelerate use of the Guard based on last night’s events,” Jensen said, offering a day-by-day recitation of what happened when.

But putting soldiers on the streets takes time. First, they have to be called up to their local armories and then are given orders and supplies before moving out. And, Jensen said, not all Guard members have the same skills.

“We train about 700 soldiers in a given year to respond for this particular mission. We can use them for other things, but they receive specific civil disturbance training. It became very apparent late Thursday night that we were going to need all 700 of those,” he said.

More turbulent nights pushed the Guard count into the thousands. Their task was to watch over public buildings and support front-line law enforcement.

“The first time the governor said to me full mobilization, I was like ‘Whoa, wait a second here, sir.’ I said: ‘Let’s walk through exactly what you just told me,’” Jensen said.

Jensen said he felt the tide turn Friday night, even though the rowdy crowds and burning buildings “looked horrible on TV.”

Ultimately, 7,123 soldiers and airmen were pressed into duty.

To that last one, the answer was food trucks.

“A flexible feeding system that could literally move with our soldiers and airmen if needed,” he said. “And the great byproduct of that is we were able to get to small business — small business that had been struggling for several months because of COVID-19 restrictions.”

The Guard members were fully armed during their deployment — in part because of credible threats authorities had picked up on. That made Jensen admittedly fearful.

“When we started bringing in soldiers, while they have had civil disturbance training it might have been a couple of years, I’m more concerned that we’re going to have engagement with a weapon, where one of my soldiers or airmen are going to shoot their weapon,” Jensen said.

Jensen told state senators that the several-day mission resulted in just 18 injuries to Guard members, all of them minor. None were the result of an altercation, although one soldier had a run-in with a squirrel who delivered a bite to the hand.

And only one time did a gun get fired. That was into the engine block of a car that was advancing on a Guard line.

Jensen drew bipartisan praise for his team’s work. Senate Minority Leader Susan Kent, DFL-Woodbury, said it was “reassuring” to have Guard members stationed in key places, including by hospitals.

Sen. Andrew Lang, R-Olivia, who has his own military experience, said the Guard was a “shining star” in a tough time.

“I always ask the question: Did you accomplish your mission? I can answer that one myself in saying absolutely you did,” he said. “You did so in a timely manner. You did so professionally.”

So what was learned from all this? Jensen said closer coordination with local authorities is key, and if the request is for 500 troops, bring 1,000 to stamp out violent disturbances quicker.