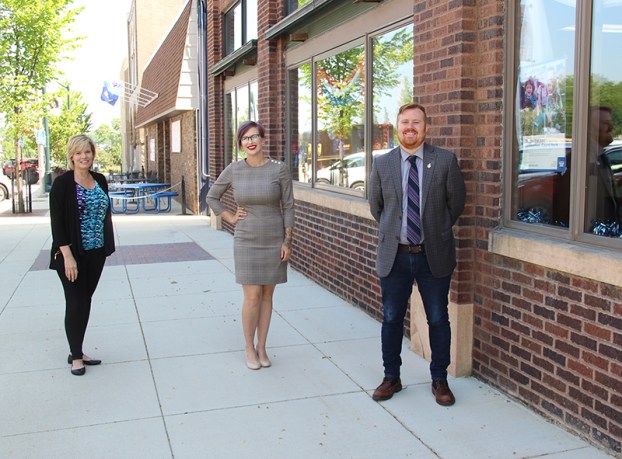 In the spirit of collaboration, the Albert Lea Convention and Visitors Bureau and Main Street Albert Lea program will move across the street at the beginning of August into a shared space with the Albert Lea-Freeborn County Chamber of Commerce and the Albert Lea Economic Development Agency.

Discussion about the organizations sharing space had been a point of discussion in recent years, and in mid-October the chamber and ALEDA moved into the building, at 132 N. Broadway.

Holly Karsjens, executive director of the CVB and director of the Main Street program, said in an age of convenience, it will be an asset to both community members and business owners looking to relocate to the community to have the organizations in one place.

The CVB had been in its location at the intersection of Clark Street and Broadway Avenue since about 2011 or 2012, Karsjens said.

ALEDA Executive Director Phillip Johnson said when he started in his position about a year and a half ago, the organizations had been meeting about the possibility of sharing resources.

“We have three organizations that are all working in the best interest for Albert Lea,” said ALEDA Executive Director Phillip Johnson.

He said he made it one of his priorities to bring the organizations together, which involved finding a building and remodeling. He noted there are many positives to having the entities together, including efficiency and proximity when working on different projects.

Karsjens said historically there have been times previously when the agencies were either housed together or directed together.

“It’s not a foreign thing,” she said.

The agencies came closer together when working on a new strategic plan for the community, along with city and county officials, which was completed earlier this year.

In the building on Broadway, the agencies will share a receptionist, as well as costs for utilities, rent, the copier, internet and other office costs, and they plan to meet weekly to talk about ongoing projects, which they said will help to keep the different groups updated and working together.

“The collaboration will be really strong and beneficial to the community,” said Shari Jenson, new executive director of the Albert Lea-Freeborn County Chamber of Commerce, noting she thinks collaboration is a key to success.

They plan to make some updates to the signage outside the building and also plan to bring in more Albert Lea-related clothing, sweatshirts and hats to have for sale in the front part of the building.

They are also working to bring another business into the old CVB space on Clark Street.