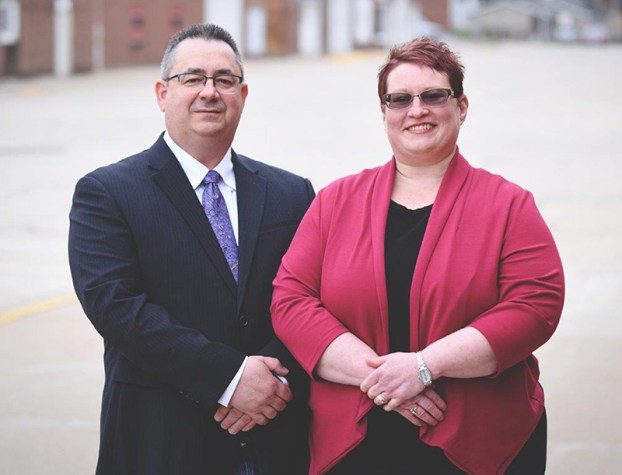 Nathan and Susan Nasinec have owned Bruss-Heitner Funeral Home in Wells since 2008. They recently announced plans that the funeral home will construct and move into a new building in the Wells Business Park. - Provided

WELLS — Owners of Bruss-Heitner Funeral Home in Wells since 2008, Susan and Nathan Nasinec have recently started plans for a new building that will be in the Wells Business Park on Minnesota Highway 22.

Susan Nasinec, also the funeral home’s president and a licensed mortician, said the move to a new building was set in motion because they want to be able to serve the community the best they can, and a new building would be a big improvement.

“Technology is a big thing now, people want to do more,” she said. “(The current funeral home) is a solid concrete building. It’s built really well. It’s just not really conducive to what we would like to do and provide for our community.”

The biggest difference between the new and old buildings will be the amount of space, she said. The new funeral home will have two separate chapels — each with its own sound systems — a large parking lot, and a lunchroom facility. The new building will also be all one level, making it more accommodating to people with disabilities.

There is an elevator at the current location, but it does not have a capability of accommodating all sizes of the different equipment people use to get around.

Another big addition in the new building will be its own crematory. In the past, Bruss-Heitner has had to use another funeral home’s crematory, which resulted in a lot of travel time to and from other homes. Since they were building a brand new funeral home, Susan Nasinec said it was just more feasible to have their own crematory in-house.

“If we’re going to do it, we might as well put everything in that we’ve thought about and wanted to do for our community,” Susan Nasinec said. “It’s very community-driven. A lot of people expressed, ‘Oh it sure would be nice if we could do this or that.’ We want to be able to provide those things.”

When the old school was torn down in Wells, right across the street from the current funeral home, the Nasinecs were encouraged to build there. However, Susan Nasinec said she was worried they might run into the same kind of problems there. Then the option to move into the new business park presented itself.

“Down in the new business park, we’re able to spread out a little bit more,” Susan Nasinec said. “We’ll be a little bit more visual for folks driving by as well. They say that there’s 5,000 cars that drive by on that road each day. What better advertising for your business is there?”

Nasinec said the process of breaking ground on the new site has slowed down a bit due to the impacts of the current pandemic, but they hope to start construction in the fall.

According to Nasinec, they hired a marketing firm who has been supplying information to the community and gauging reactions, and so far community support has been overwhelmingly positive.

When the funeral home eventually moves out of its current building, Nasinec said they plan to sell the building and have already had some interest.

“We’re really excited for what we’ll be able to offer the community,” Nasinec said. “In talking to the former owners, they’re 100% behind us, and they understand that things are changing. We’re trying really hard to put a building up that the community would be happy with and proud to be utilizing our services.”