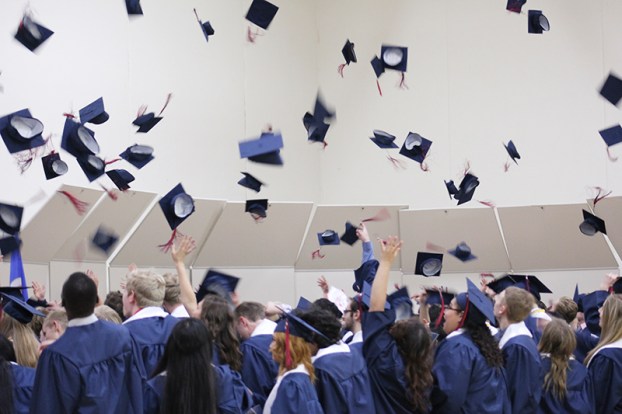 The class of 2019 celebrates their graduation at the end of the commencement ceremony for Albert Lea High School. Sarah Kocher/Albert Lea Tribune

“We know this is a very different end to our school year, but it will not prevent us from honoring our senior class and ensuring they are recognized for the incredible work they have accomplished during their journey toward graduation,” a letter sent out to parents states.

In case of inclement weather, the ceremonies will be moved to July 25 at the same times.

Albert Lea High School Principal Mark Grossklaus said the speakers will be the same for both ceremonies. Grossklaus will introduce the people on the stage, and slated to speak are Albert Lea School Board Member Kim Nelson, student Alexis Zak and Superintendent Mike Funk.

As in previous years, students will still be able to walk across the stage as their names are read, but they will not be able to shake hands.

He said though in the past each student was given 10 tickets for family and friends to attend graduation, this year because of Minnesota Department of Health guidelines in place for COVID-19, each student will be mailed only two commencement tickets in the mail for guests.

Though some may be disappointed because of the limited number of people who can attend or because the ceremony is being split into two groups, he said this was the only option for an in-person graduation.

“We heard people didn’t want to have a virtual one,” Grossklaus said. “This was the only way we could physically do it based on the rules that we have to abide by.”

The school board had initially voted to move the graduation to the July 24 date in hopes to be able to have some form of in-person ceremony. He and a group of a few school board members, law enforcement leaders, public health officials and the superintendent met to discuss concerns and the best approach for moving forward.

Despite the limitations, the principal said he and other staff are excited to have the commencement ceremonies.

“For a lot of schools it was virtual,” he said. “I think it’s a big thing — especially for parents — to see their student cross the stage.”

Masks will be available for attendees at the event as needed, along with hand sanitizer.

The ceremonies will be live-streamed at https://bit.ly.alhsgrad for people who are not able to attend.