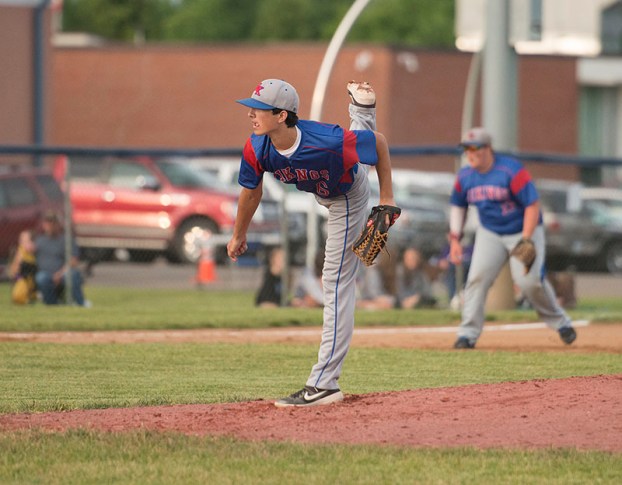 Despite rain cutting the game short in the sixth inning, the Vikings had built up enough of a lead to claim the 5-0 victory.

The Warriors got two base runners aboard in the first inning, but a double play by the Vikings ended the inning without the runs crossing the plate.

It wasn’t until the bottom of the second inning when the Vikings took the lead. Junior Isaac Renteria hit a single to start off the inning and was hit to second on a  single by junior Brendon Varner and made it to third when sophomore Jace Gentz hit into a double play. Renteria was brought home in the next at-bat when junior Kael Julseth hit a deep single to center field. 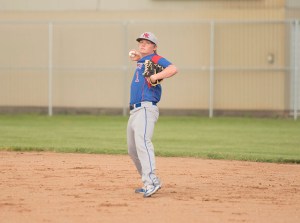 Junior Carter Severson makes a throw to first base for the out after scooping up a ground ball. The Vikings beat the Warriors 5-0. – Tyler Julson/Albert Lea Tribune

After a one-two-three third inning for the Vikings defensively, they added a run when senior Caden Schrage was hit in by fellow senior Ethian Tasker who found a gap in center field and recorded a double.

Northwood-Kensett tacked on another run in the fourth inning after Julseth reached base and advanced on a stolen base before being hit in by a single off the bat of senior Austin Efflandt.

Schrage scored again in the bottom of the fifth after a double from junior Cade Hengesteg, who was later batted in after a sacrifice fly from Renteria.

The Warriors continued to struggle to get base runners into the sixth inning, and after their final out of the inning was recorded, the game was stopped short due to heavy rainfall.

Northwood-Kensett improves to 4-1 on the season and have the tall task of taking on the Knights of Newman Catholic on the road Friday night.

The Knights are currently 4-0 and ranked No. 3 in Class 1A after winning the state championship in 2019.