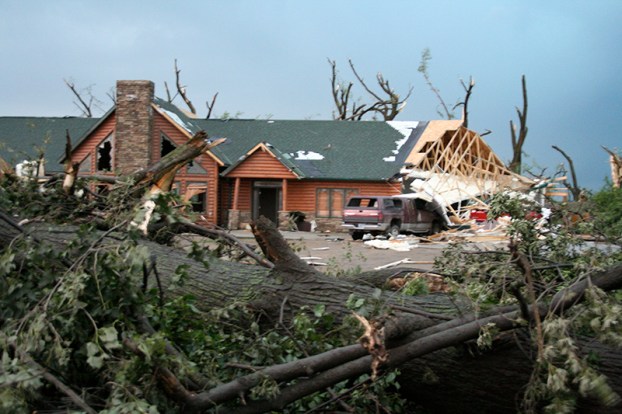 Part of the new home of John Perschbacher was destroyed and thrown on top of a pickup on the property. Many trees had also fallen over on the estate. - Tim Engstrom/Albert Lea Tribune

Dozens of area residents took to the Tribune’s Facebook page last week to share memories of the tornadoes:

“We were up north fishing. They had a bad storm go through earlier in the day. We went fishing afterwards and when we were pulling the boat off the lake, we had MPR on, we heard a tornado touched down in Kiester and Albert Lea. (Will never forget the feeling that announcement gave me ) Very scary as we had small boys back home with grandma. We called home and made sure everyone was ok but was a nerve racking trip home after a nice week of fishing.”

“My father and brother’s farm was hit by this half-mile wide, devastating tornado. I’ll never forget my brother calling me to say they’d been hit but were safe. My brother, his wife and my father have/had vivid stories of that night. My family came down to help clean up the farm the next morning. My sister-in-law’s family were true heroes that day. They mobilized with equipment and family to help clear the farm yard. Such a blessing!

The light of day revealed the power of wind, scouring a path for miles. Building debris, cars, garage doors, tractors, equipment, and trees all scattered chaotically in yards and fields. Twisted sheets of metal were wrapped around naked trees that were left standing.

That summer revealed the strength, courage and tenacity of the families that live in southern Minnesota. In a very short time, the land was cleared and green crops replaced scoured dirt. Leaves covered trees as they healed. Houses and equipment were repaired or replaced. Chaos was replaced with order once more.

I don’t ever forget that just a couple of miles from the farm, a life was lost with Kathy Woodside. That sad death leaves me eternally grateful that my family members were not physically hurt during the storm.

“ I was on the phone with my son — told him a tornado had come down from the sky. It came down and went up, came down again, hit the ground and exploded. I ran out to the end of the driveway to watch it come across the field — ran back into the house and all of the doors blew open. As I was trying to get the back door closed — I looked up and could see it above my house with trees and stuff in it — went over my house and I ran to get the camera — by the time I went out to my backyard it was blowing up a neighbor’s house. I will never forget the sound. So much damage — I walked down to my neighbors house on 251 — it was so sad to see.”

“Super Humid that day was helping my family haul corn from family’s farm in Manchester to Freeborn Elevator was having super that day at my parents about 6:30 when power went out, the sky got super weird, scary dark, windy temperature dropped in a hurry clouds were swirling around crazy could hear Fire house siren going off in Manchester then the crap hit the fan then scrambled to basement and prayed! High line electric poles snapped off like kindling laying on ground super dangerous!”

“Was my wife and sons birthday, lost our hog barn and my in-laws farm was completely destroyed! Will never forget the mysterious silence loading what was left of our pigs in complete darkness when it was all over.”

“I was working for Youth For Christ at the time, I was the videographer for their summer youth camp near Bricelyn MN. I remember it was beastly hot that day so most of the activities that afternoon were canceled and we just took kids to the pool. Anyway I got to camp just about the time all the warnings started. There was about 50 staff and students crammed into a tiny church basement because that was the only shelter on site at the time. We actually saw some rotation but nothing touched down near us…it got real close though.”

“My wife and two children were on our way home from Lake Okoboji, and we could see the dark skies ahead of us. We pulled off to get gas at Blue Earth and within minutes, the storm was hitting there from the south and the sirens were going off. We were told to get under cover by going in the gas station. Little did my wife know that when she left the van with the kids, she locked it with the keys in, and our spare set was at home. We quickly called my dad to come and get us, and he said they couldn’t get out of town as there had been tornadoes just west of Albert Lea and the roads were blocked. We decided we should go to the Country Kitchen for supper but realized my daughter didn’t have shoes so we had to walk down to Walmart and get something for her feet. After a nice meal and a wait of a couple of hours, we heard from my dad, who was going to take off and try to get us. He jumped off the interstate at Alden and took the old road to Blue Earth. There’s a big curve a few miles east of Blue Earth where there is some water. Just past that curve my dad hit a deer. Fortunately, he was able to drive the car and get us the keys and get us home. Driving on the interstate home, we sure saw all the flashing red lights in the Armstrong area.”

“It was a day. My son was currently in Mr. Fiscus’s class and they  were studying weather. John was excited that he might get to see a tornado. I had dropped him off at baseball practice and went to run an errand. I heard that a tornado had struck by Keister. By the time I returned to the ball field, the sirens were going off. Practice was still going on, and the coach was going to continue practice, “It’s just a warning, it doesn’t look bad.” I said we were going home, he could continue practice if he wanted. We went home and turned on the TV, and it soon appeared as though it was headed right toward us. We went to the basement with a radio and listened to KATE. Not long later they said there was a funnel cloud spotted over Lake Chapeau Dr., right behind our house. John asked, are we going to get hit? I responded I thought so. He said “ I think I’m scared now.” Well. The cloud didn’t touch down. The next day friends in two different directions showed me pictures, and yes, the funnel was right over our house. Thank God, a very near miss.

My wife, Perian and daughter, Kate were in Morris for a college interview and were headed home. They ended up driving through the destruction in northern Minnesota done by the storm.

I also worked at the hospital, and when I felt it was safe to go in, I went to the hospital. There were lots of people in the Emergency Room, and they had opened up the Same Day Surgery unit to find a place for everyone. Luckily, most injuries were minor, but not all as anyone in Albert Lea at the time knows.”

“10 years ago, about a week after graduating high school, a couple of us graduates met up to hang out and go for a drive.

The day was June 17th, 2010. I slept in that day. Woke up around 10 a.m. and headed outside to see the dogs. It was hot, and incredibly windy. Pretty weird for Minnesota, but not unheard of.

In the forecast that afternoon were tornados. On the hour by hour infographic during the weather segment on the local news, they had tornado symbols in the early afternoon- not the clouds and lightning symbol you usually saw when there was a threat of severe weather.

My mother was working as a radio DJ at the time and said the storms were to be incredibly strong. Being bolden 18 year olds, a couple of us friends met up outside of town at St. Johns Lutheran Home to chase these incoming storms. I’ll always remember how eerie the clouds looked as we were all getting into one vehicle. They looked like bubble wrap- distinct domes spread across the sky.

We went north and west toward where the darkest skies were. Driving down main street in Alden, Minnesota, Nick pointed up to a fast moving cloud and shouted something. As we emerged from the corridor of brick buildings, we saw an EF4 tornado churning its way across a farm field- the one you see in the above video.

We got spooked and drove the other direction. We came upon a family standing at the end of their driveway watching the action, and asked if we could stop and ride it out with them in their home. They happily obliged (Minnesota Nice). After we got the all clear from my Mom, who was broadcasting up to date information through all of this to thousands of people in the area huddled in their basements, we made the trek back to where we initially met.

The destruction we witnessed left us in silence for a majority of the drive home. Overturned cars. Crushed homes. Power lines snapped with ease. Construction signs and equipment were splayed in nearby farm fields.

This video awoke some pretty vivid memories today. I was so scared of tornadoes as a kid, just ask my sisters how I handled the tornadoes in Glenville! There’s video evidence of that somewhere. Crazy to get so close to one.”

See more resident accounts of the 2010 tornadoes in the feature story here.