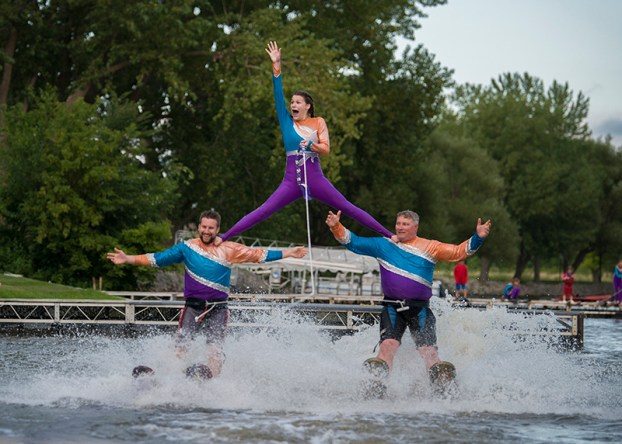 After months of uncertainty due to the COVID-19 pandemic, the Bayside Ski Team has announced the shows will go on this summer.

The first three shows scheduled for the waterski team will start at 6:30 p.m. June 25, July 2 and July 3 on Edgewater Bay. After the July 3 show, the team will have regular weekly performances starting at 6:30 p.m. Thursdays through Labor Day.

While the ski team typically has a July 4 show, they decided to move it to July 3 this year since the annual Albert Lea Third of July Parade was canceled.

While it didn’t stop the shows from going on, the pandemic has forced some changes on the performers. The originally planned ski show theme had to go out the window, said Kristen Dulas, who is married to show director Ike Dulas. Since only families or smaller groups of adults can ski together — Kristen and Ike Dulas plan to ski with their daughter in a pyramid — the show theme had to evolve. Instead, this season’s shows will focus on helping the crowds get to know the families. Bios and other facts such as combined waterskiing experience will be announced as families perform.

“It’ll be kind of fun to see the creativity, to see what families can do together,” Kristen Dulas said.

Another change is that those attending the free shows will have to adhere to social distancing guidelines of six feet apart from other groups, and the total crowd will be capped at 250 people. There won’t be any food vendors this summer at the shows, either, so people are encouraged to bring their own coolers or snacks.

Shows tend to go on rain or shine — as long as there’s no lightning — but Dulas said the Bayside Skiers Facebook page will have the most up-to-date information on possible weather cancellations or other show information.

The waterski team has seen its numbers grow in recent years, Dulas said, and should have about 23 skiers participating this season. Sara Wenner is the president of the Bayside Ski Team.

Since boat docks and maintenance were considered essential during COVID-19 shutdowns, the ski team was able to have its annual fundraiser of installing docks and lifts, which Dulas said made it possible for the team to perform this year.

While the changes will call for some adjustments to be made, Dulas said the team is just glad they can be back in the water.