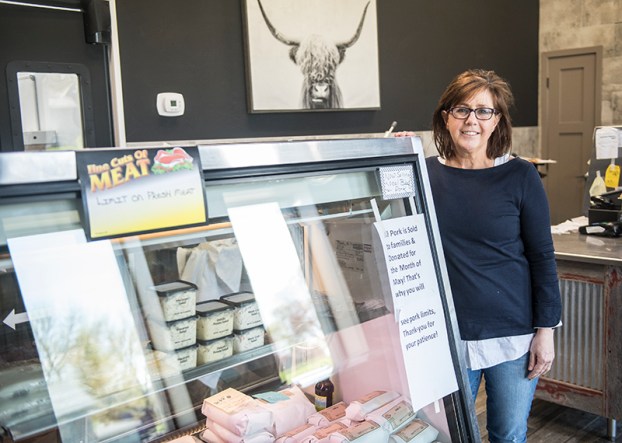 As the country works its way through the COVID-19 pandemic, the economic effects are materializing in different ways, and the meat industry is no different. U.S. beef and pork processing capacity was down 40% from last year as of Monday, according to The Associated Press, and some retailers — including Hy-Vee — have announced they’ll be limiting how much meat customers can buy at a time.

Darcy Johnson, owner of Conger Meat Market with her husband, Jeremy, said the crisis situation leading to meat packing plants being shut down or otherwise limited has had a big impact on the supply. In general, she said, farmers sell their livestock to the packing plants for processing, which then sell the meat to distributors, which sell the products to retailers. With plants not processing as much, farmers are left with more livestock, plants have to increase prices and so do distributors as a result, leaving retailers with less fresh meat coming on to store shelves and having to charge their customers more for it. If there ends up being a shortage, Johnson said, it will be of fresh meat; there is plenty of frozen product.

As a result, Conger Meat Market is focusing more on processing meat than buying from distributors for the time being, Johnson said. The meat packing plants are the ones setting prices, forcing distributors in some cases to double fresh meat prices from what they were two weeks ago. Johnson said Conger Meat Market will not pay those prices and will likely run out of some products temporarily as a result, but that the business is helping farmers process meat instead.

The business has doubled its processing to help with the situation — processing about 40 hogs a week as opposed to the 15 it usually averaged. But there’s only so much room and equipment, Johnson said, and therefore only so many animals Conger Meat can process. On Tuesday the business announced on its Facebook page that it is at maximum processing capacity for 2020, and could no longer accept any more beef or pork appointments at that time. The decision was a difficult one to make, but Johnson said at one point she was getting calls for processing every three minutes 10 hours a day, and that’s just not sustainable.

“It’s just temporary until we all get caught up again,” she said.

Johnson assumes it’s a similar situation for most local processors.

“We’re all in the same situation,” she said. “It’s not a good time to be buying to fill your freezer.”

The upside, though, according to Johnson, is more people are realizing they can buy local when it comes to their meat, too. Customers can cut out the distributors and buy right from farmers, or from local processors and farmers markets. Johnson said the local area in particular is surrounded by many successful farmers.

“A lot of people don’t realize they can buy from a local farmer,” she said. “I’m just hoping when this crisis is over, people remember to call their local markets closest to you — they all have farmers waiting to sell.”

Johnson said she has had some customers who are confused by Conger Meat having to limit meat purchases or being out of certain items. If it has a processing plant, why doesn’t Conger Meat just butcher more? The reason is because most of the animals coming in for processing have already been sold elsewhere; most of what is being processed isn’t going onto Conger Meat Market shelves, Johnson said.

“We’re doing what we can,” she said. “It’s important people support their small local markets and local farmers.”

During this month, she said there will be a good reason some of the business’s pork products are gone. A group of pastors bought 30 hogs to have processed, with the meat going to first responders and food shelves throughout Minnesota.

While some parts have been challenging or frustrating, Johnson said it’s just temporary, and hopes things will normalize this summer.