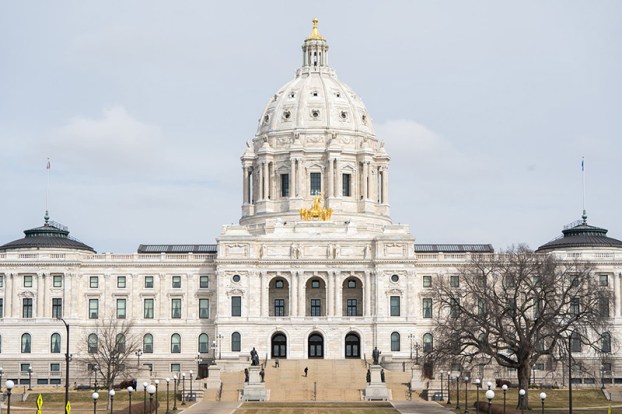 Legislators arrive to the Minnesota State Capitol before the house comes into session on March 26. Months ago, lawmakers were debating how to spend extra money. This week, state leaders learn if they’ll have to confront a deficit instead. - Evan Frost/MPR News file

Minnesota’s economic peril stemming from COVID-19 will be front and center this week with a new budget projection.

With two weeks to go before the state Legislature must adjourn its session, lawmakers will receive the report Tuesday from the state finance agency amid widespread belief a deficit is ahead. It is rare for an assessment of this kind to be done, but the unparalleled circumstances led to it.

It’s a sharp turn from February when an economic forecast predicted a $1.5 billion surplus would accumulate by next summer. A two-year, $48 billion budget that was approved last year runs through July 2021.

The coronavirus pandemic pushed many people out of work and led to restrictions on commerce and travel that reduced consumer spending.

Last month, officials reported tax collections had already dipped by $100 million in a period that captured only a small fraction of the COVID-19 fallout.

Minnesota has delayed several tax deadlines so there could be a cash crunch until expected dollars come in.

Longtime Sen. Richard Cohen, DFL-St. Paul, seized on that as a measure of uncertainty that will be hard for the Department of Minnesota Management and Budget to clarify this week.

“Because there’s been a delay in income and sales tax payments it’s going to be difficult to determine the exact amount what that deficit might be,” Cohen said.

There is also expected loss in revenue ahead. Many people took pay cuts or lost jobs, so future income taxes will likely take a hit. Some businesses will go under, which will take its own toll.

If people aren’t shopping or going to restaurants, that’s less in sales taxes. Even when things return to normal, those dine-out meals that didn’t happen in March, April or May won’t necessarily be replaced by extra outings in June, July or beyond.

Minnesota has received about $2 billion from the federal coronavirus relief bill. Some money went directly to Hennepin and Ramsey counties and there’s an expectation that dollars will be forwarded to cities for their coronavirus response.

There are limitations on what can be done with that money. It can be used to reimburse the state for COVID-19-related costs it has already incurred or expects to. But states aren’t allowed to use it for revenue replacement, meaning substituting for lost tax dollars.

The deteriorating budget environment is already having an impact.

Senate Republicans have moved away from some of the tax cuts they planned to do for Social Security recipients and others. Proposals for expanded preschool programs that were high on the agenda of House Democrats earlier have been put on the backburner.

Officials in DFL Gov. Tim Walz’s administration believe that if the budget report shows a looming deficit, it will permit them to tap into Minnesota’s rainy day reserves to cover some state expenses.

There is more than $2 billion in the state’s reserve fund, so the blow would be cushioned to an extent.

In some other states, governors are furloughing state workers, and the call for that to happen here could get louder if things are dire.

In a TPT “Almanac” appearance on Friday, Walz wouldn’t commit to that.

“We’re going to have to make sure in these services that matter, the Minnesota Department of Health and those type of things, we continue on,” Walz said.

Walz said he’s pressing the White House and Congress to free up more money for states.