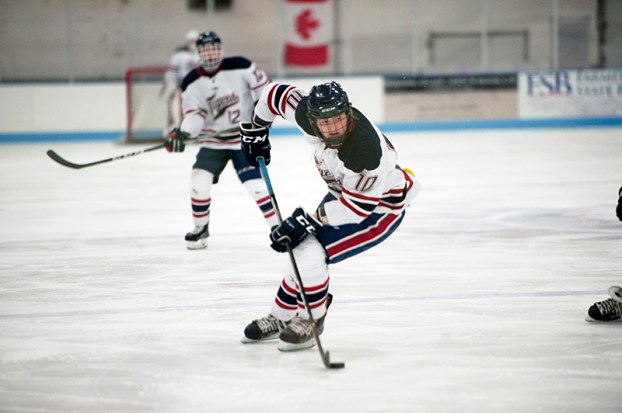 For 2018 Albert Lea High School graduate Michael Savelkoul, hockey has been a passion for as long as he can remember. This fall he will take the next step in his hockey career by signing to play with Bethel University.

After graduating from high school, Savelkoul went on to play two years for the New Ulm Steel, a junior hockey team in the North American Tier III Hockey League.

In his latest season for the Steel, Savelkoul finished with 61 points, second most on the team. He scored 13 goals and had a team-leading 48 assists, 12 more than the next highest.

Savelkoul said the transition from high school to junior league hockey wasn’t always easy. He said the game gets a lot more physical and fast-paced, and the schedule becomes a lot more strenuous.

“You play 47 games and when you’re winning and producing it can be so much fun, but when times aren’t going well it can really be a gut check,” Savelkoul said. “You have to just put your nose down and trust your work ethic to get you out of a slump. It’s a good life test because you know nothing (is) going to be smooth sailing all the time.”

The Steel finished the season with a 31-13 record and a third-place finish in the West Division regular season standings. The playoffs were canceled due to the COVID-19 pandemic.

Savelkoul said his favorite memory from junior hockey was the 16-game win streak the team went on at the end of this year’s regular season. One particular game that stuck out to him was against division rival, the North Iowa Bulls. Savelkoul and the Steel won the game 5-3 and each member of his line had five points.

By signing to play hockey for Bethel, Savelkoul takes the next step in his hockey career. He said playing for a college team was always his goal when he signed with the Steel two years ago.

According to Savelkoul, he chose Bethel because he really connected with head coach Chris McKelvie and the direction he has the program moving. The New Ulm team captain his first year with the team also went on to play for Bethel, which was another factor in this decision.

“I’m really excited to just take the next step in my hockey career,” Savelkoul said. “Bethel takes their hockey program very seriously and I can’t wait to be a part of that. Just to play for a college will be awesome in itself.”

While playing for the Steel, Savelkoul also took online classes through Normandale Community College and will start at Bethel with 53 college credits. Savelkoul said it was important to take those courses as a way to keep his mind occupied and help to prepare him a little for going full time at Bethel. He said trying to balance junior hockey and schooling was busy at first, but wasn’t bad once he got used to it.

Savelkoul said there were a lot of people to thank for helping him get this far in his hockey career, and Roy Nystrom and Mike Carlson were two in particular. He said Nystrom was his gym teacher in elementary school and took him under his wing and made him fall in love with the game.

“To have great impacts like these people can do so much for somebody’s game and it just really means a lot to me,” he said.

“I couldn’t be saying I’ll be playing college hockey next year if it weren’t for the efforts made by everyone around me. I’m forever grateful for that.”