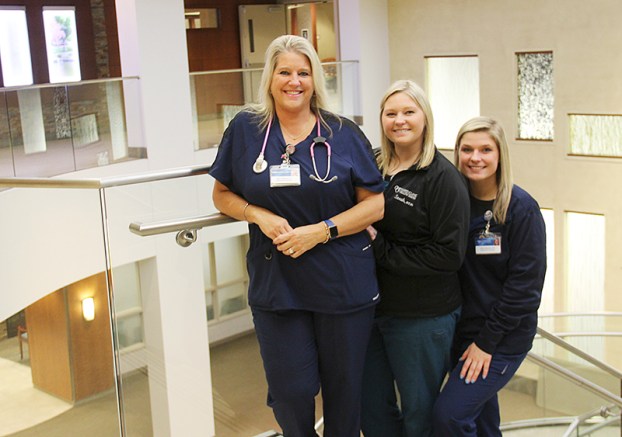 Mother Shari Anderson and her daughters Sarah and Jenna Anderson are all employed at Mayo Clinic Health System in Albert Lea. The mother and daughters said they enjoy helping people through their jobs. - Sarah Stultz/Albert Lea Tribune

All in the family

Mother, daughters enjoy helping others through jobs at Mayo in Albert Lea

One mother and her daughters are fulfilling their wish to help people through their jobs at Mayo Clinic Health System in Albert Lea.

Mother Shari Anderson, 51, has worked at Mayo Clinic for 32 years, starting first in 1987 as a health unit coordinator on the medical/surgical floor of the hospital. Over the years, she has also worked as a hemodialysis technician in the dialysis unit and as a health unit coordinator in the emergency department. In 2004, she graduated from Riverland Community College as a registered nurse, and worked on the medical/surgical floor and as a float resource nurse for two years each. Eleven years ago, she said she found what she calls her “forever home” working in the emergency department.

“I like the diversity of what comes through the emergency room,” she said. “Nothing is the same.”

She also likes that she can use all of her thinking skills as she assists with the various types of cases.

She said she knew from a young age she wanted to be in the medical field and started as a candy striper in Albert Lea.

She said she was influenced by her mother to work in the medical field.

“Seeing how happy she was helping people out, I wanted to be like my mom,” Sarah Anderson said.

She said she enjoys the people she works with and the interactions she has with patients.

Daughter Jenna Anderson, 23, graduated from Riverland Community College as a licensed practical nurse in May 2018, passed her state boards in July and was hired at Mayo in August 2018 in the family practice department. She was a float nurse but now works directly with nurse practitioner Rebekah Mowers.

“I love coming to work, knowing my mother and sister are in the same workplace,” Jenna Anderson said.

She said she has plans of going back to Riverland and obtaining her Bachelor of Science in nursing to become a registered nurse. Eventually, she wants to work in the emergency department like her mother.

When they’re not at work, the three women said they mostly enjoy spending time together.

Working on the basics

5 things to do this weekend

T-shirts made after officer shooting generate $16K for family

A part of the process

Wit of Wilde: Riverland presents ‘The Importance of Being Earnest’

5 cases of counterfeit bills reported and other reports