The Met: Live in HD returns for season of… 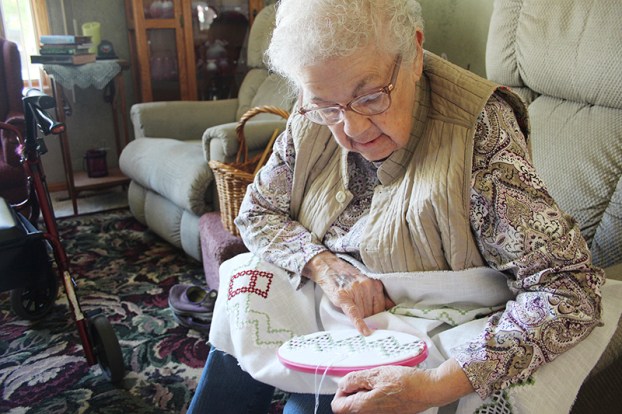 Hardanger, an embroidery with some Scandanavian history and elements reminiscent of cross stitch, gives her something to do, she said.

“I can’t just sit and watch TV,” she said. “I’ve got to have something in my hands.”

She’s done hardanger tree skirts. Hardanger altar cloths. Hardanger curtains. A keepsake box with a hardanger top. Coasters that have a slot for photos have delicate hardanger pieces inside instead.

She pulls out a doily with “UFF DA” embroidered around the edges.

“This is Scandanavian,” she said.

Hardanger uses a special material that looks like fabric graph paper on a minute scale; a typical hardanger fabric has 22 thread pairs per inch. The thread pairs are woven over and under each other both horizontally and vertically to create the graph-like squares in the fabric. 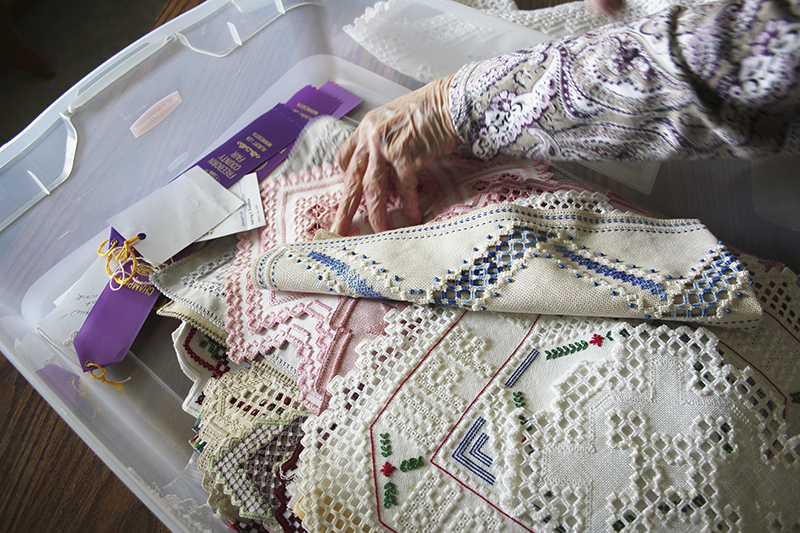 Solveig Peterson keeps a tote of past hardanger projects as well as some of their accompanying Freeborn County Fair ribbons. Sarah Kocher/Albert Lea Tribune

Until recently, Peterson operated a hardanger shop out of a spare room in her home. She said she never advertised it, but word of mouth meant people that did hardanger knew where it was.

She started the shop in 2002, but she started hardanger shortly after her husband died 30 years ago. She had already done knitting, crocheting and embroidery.

“I wanted something different,” Peterson said. “… You can only  knit so much and crochet so much.”

Peterson said she took classes through Community Education. While she likes to go for the bigger pieces — they take longer, she said — she also makes a lot of approximately 10-inch squares. To finish a piece can take anywhere from weeks to months.

Eventually, the hardanger shop came to be too much for her, Peterson said. Kristi Feist of Wells’ Humble Heart Quilt Shop purchased her stock — but not before Peterson set aside a personal stock to continue hardanger as a hobby.

Feist said she already offered some hardanger threads as part of her inventory, but that Peterson’s stock expanded their collection by an estimated 300%. Now, she offers different colors of fabric, patterns, more thread options and hoops.

“It’s a huge expansion for us,” she said.

Feist knew of Peterson through her mother-in-law, who does hardanger. But she agreed to purchase Peterson’s inventory after a customer begged her to look into it so the community did not lose its hardanger offerings.

“I decided to do it because that’s kind of how my business has been run over the last 10 years is we don’t want to lose things in the community,” Feist said. “… This is something that I just felt we wanted to keep.”

Several of Peterson’s pieces have won purple ribbons at the Freeborn County Fair, including a 2019 piece she gifted to her grandson but requested back to enter.

Most of the pieces she makes are gifts for friends and family. Peterson said the only pieces she was paid for were some hardanger curtains she made for a friend whose originals, made by her friend’s mother-in-law, were damaged by a house fire. Her friend asked her to write up an estimate for the insurance company, and the company paid her to remake the curtains. Peterson stitched replicas by looking at a picture of the original curtains, she said.

She does revise patterns, but not often. She revises her work more frequently. Hardanger not only involves stitching, but also pulling out portions of the thread pairs to make decorative holes. It takes a lot of counting to make sure all the stitches and pulled threads wind up in the correct place. It’s not for the faint of heart or those too attached to their work.

“If you can’t do hardanger without ripping it up … you better not do it,” she said.

She does hardanger more now than she used to, she said, and sometimes spends eight hours a day on it. Through her hobby, she has met a lot of great people, great customers and lasting friends, Peterson said.