A home of their own 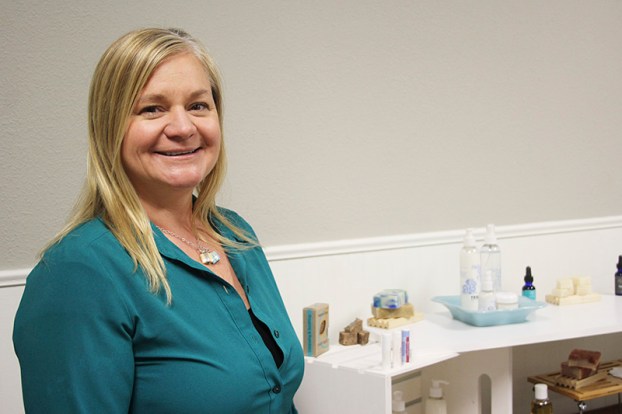 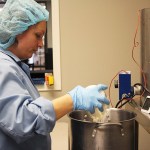 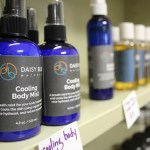 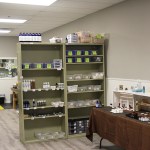 The move to the Knutson Building is one part of a shift from a consultant to retail model for Daisy Blue Naturals. Employee Nikki Cromwell said customers have reacted positively to the move from their warehouse location in the Albert Lea Business Development Center. -Sarah Kocher/Albert Lea Tribune 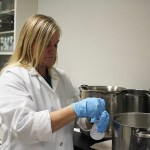 Jena Thompson checks the pH of a Daisy Blue face moisturizer using a pH meter. Customers who walk into the Daisy Blue store in the Knutson Building can see how products are made should they come in when a team member is whipping up a batch of product. -Sarah Kocher/Albert Lea Tribune 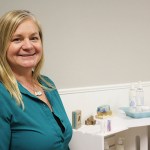 Tucked into the Knutson building off Newton Avenue, Daisy Blue hits you with a scent wave of essential oils that mingle together, pleasantly indistinguishable to the untrained nose.

The trained nose is behind the helm, running an almost 18-year-old business from a new location since a move in November.

Jena Thompson, chemist and Daisy Blue Naturals CEO, said the move was a mutual decision between the business and the Albert Lea Business Development Center, which she said is intended as a business incubator. Moving out means another business can expand into that space.

But more importantly for Daisy Blue, moving into a retail space means reconnecting with what Thompson sees as the strength — and fun — of her business: being able to interact with customers.

“I really didn’t want to be in a warehouse anymore,” she said.

Though she loved being in direct sales, the change to a retail location came after a business model switch last February. She said she loves being downtown.

“I knew a couple years ago that I needed to change it,” Thompson said. “It was not going to be the sustainability for Daisy Blue that we wanted. We had a lot of great consultants, but quite honestly, we weren’t growing new ones. We were maintaining. And it was also, I think, our product line is going to do much better in a retail setting and I can be more that voice again, so it feels like I was able to kind of get back to what I started with.”

Additionally, at the warehouse there weren’t set hours for customers. Thompson said it was harder to maintain that direct relationship between consumer and provider.

While Thompson said Daisy Blue’s strongest product outlet is still e-commerce, she estimates a 500 percent increase in customer walk-ins since the transition.

“This is more boutique,” she said. “It’s cute. It flows better for us. I think it’s a way better fit for the product line. And I love people, and now we have more people walking in, which is awesome.”

And with a retail location, customers who come in while Nikki Cromwell, whose colloquial title at Daisy Blue Naturals is “maker of all things,” is whipping up a batch of product can see how things are made. Cromwell has worked for the company for over six months now. Most of her time is spent making and labeling products and preparing them for shipping.

“I have always used Daisy Blue products, so it’s really cool to know how it’s made,” she said.

According to Thompson, the retail location also allows the Daisy Blue team to change its manufacturing process.

“We’re able to be more creative and to get different products out a lot quicker in this new market,” she said. “In the past market, we were locked into a catalog. We were locked into, you know, making sure we had what the consultants needed.”

With the change, she can run smaller batches, or offerings available only in the store, without having to worry about making sure every consultant has enough. Thompson also wants to use the space to get classes going.

Cromwell said customer reactions to the move have been positive.

“Every single time somebody comes in they say how excited they are that we’re downtown instead of back at the business incubator,” Cromwell said.

Thompson thanked the city and the Albert Lea Business Development Center for their support from the beginning of her company.

“They really do want growth in this town,” she said. “I really believe it.”

The Knutson building is also growing into a sort of personal care haven, Thompson said, as the building houses a hair salon and massage therapist as well. She has always envisioned having Daisy Blue Naturals be part of a greater wellness center, she said; this is part of what her new location in Austin is intended for, too.

Thompson started Daisy Blue after studying chemistry, after which she worked as a safety and environmental manager with polyurethane. Afterward, she worked two years for a pharmaceutical company, processing horse urine.

“I always say it was an easy transition from horse pee to Daisy Blue,” Thompson joked. But really, she was pregnant with her son and knew she wanted natural products to use for him.

She knew she wanted to start showing people options for herbs and vitamins, but after looking into pharmacy, she discovered that wasn’t the way.

“We all are given a life path,” she said. “We have to just find out what that path and purpose is. And once you find your passion, what lights you up, you know you’re on the right path. And when I started creating products, that’s what it was for me.”

She’s a creator, she said, so staying involved with product creation is important to her. She likes to look at products that are not natural and challenge herself to make them “better,” with natural ingredients.

“Our goal is to always stay hands-on with our product making,” she said.