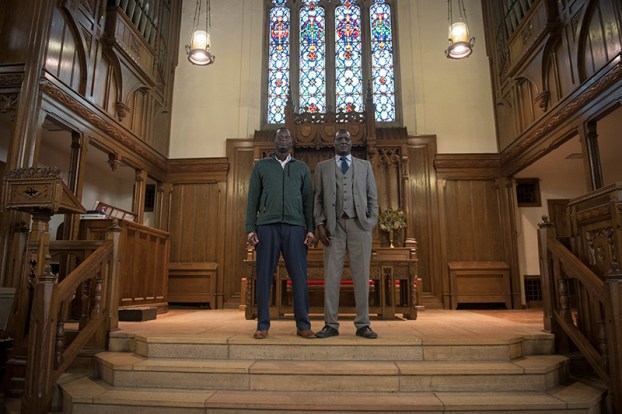 Simon Dhol, right, stands with Kaway Goy in First Presbyterian Church in Albert Lea. Dhol is the pastor of South Sudanese services at the church, and Goy is the president of the Sudanese Nuer Christian and Lutheran Church of Minnesota. Colleen Harrison/Albert Lea Tribune

In South Sudanese worship services, everyone can play a role 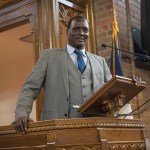 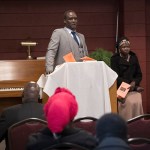 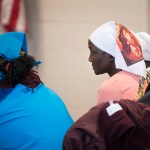 The local South Sudanese church-going community meets weekly for worship services, either at Zion Lutheran Church or at First Presbyterian Church. About every two months, there is a regional worship that South Sudanese community members from as far as St. Cloud attend in Albert Lea. Colleen Harrison/Albert Lea Tribune 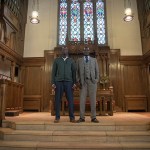 Simon Dhol, right, stands with Kaway Goy in First Presbyterian Church in Albert Lea. Dhol is the pastor of South Sudanese services at the church, and Goy is the president of the Sudanese Nuer Christian and Lutheran Church of Minnesota. Colleen Harrison/Albert Lea Tribune

It’s a frigid Sunday morning in Albert Lea, and while an impending snowstorm has kept away some churchgoers, singing can still be heard coming from a lower level room of First Presbyterian Church.

A group of about two dozen South Sudanese community members sing along in a worship song, sung in their native Nuer language. Some read from pamphlets or books, while others know the song by heart.

Each week, the Rev. Simon Dhol is a part of leading South Sudanese church services at First Presbyterian. While he is a pastor, the roles in South Sudanese worship services are shared among worshippers.

“We want everyone to play a role,” he said.

One woman reads from the Bible, before the room breaks into song. Then a man comes up and talks to the congregation, before there’s more singing, and eventually Dhol stands up in front of his congregation.

The shared efforts are a custom for South Sudanese, Dhol said, and the service resembles ones they attended back home growing up.

One of the other speakers at the service is Kaway Goy, a fellow member of the local South Sudanese community, president of the Sudanese Nuer Christian and Lutheran Church of Minnesota, and Dhol’s second cousin.

About once every two months the regional South Sudanese population — from as far north as St. Cloud and as far west as Mankato — meets to worship together and to celebrate their community.

“We’ve been Christians a long time, we know God is the most important thing,” Goy said of South Sudanese people. “We do God’s work and we’re here to worship God, and everything we do in life together.”

Both men said it’s important for their community to support each other as they navigate their lives. Keeping loyal to their faith helps them remember right from wrong, and also helps them pass on their culture to the next generations.

“We want to keep a community, a united community,” Dhol said.

The local South Sudanese community does not have the resources to buy its own building for worship, but has been lucky to be able to use space at both Zion Lutheran Church and First Presbyterian for free. Services at Zion started in 2003, with First Presbyterian services starting in 2011.

Dhol said he has always felt God’s calling, which in part led him to getting his bachelor’s degree through a seminary to be a pastor.

“All people, God calls them,” he said, going on to say he has long had a strong feeling inside of him leading him to help others.

Dhol has helped lead efforts to collect money to send to congregation relatives still in South Sudan, and to send clothes and bring medicine while on missionary trips back, where he has helped build churches and helped lay piping for villagers to access clean water. Churchgoers have also raised money for members locally who might be going through tough times.

The congregation’s efforts have also inspired others from outside of the South Sudanese community to help. Sewing groups have donated blankets and clothing for Dhol to take back with him on visits home.

The two men said they’re often brought back to the fighting and violence in their home country. There is currently an ongoing civil war in South Sudan between the government and opposition forces, one that has taken a number of family members away from refugees now in Albert Lea.

While they said they pray for their family and friends still in South Sudan, and for a way for peace to reach their homeland, both Goy and Dhol said they’re happy to now call Albert Lea home.

“It seems like Albert Lea is a good place to raise a family,” Goy said. “There’s nothing more important in this world than God and family.”

“We want to be seen as part of the community,” Dhol said. “That’s what we try to show to others here.”

2017 – The last time Dhol went back to South Sudan