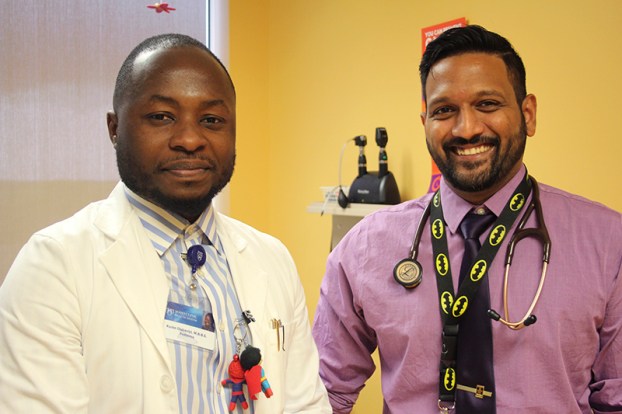 Ayokunie Olubaniyi, left, and Vijay Venugopal pose for a photo in one of the exam rooms at Mayo Clinic Health System in Albert Lea and Austin, complete with their superhero conversation-starters. - Sarah Kocher/Albert Lea Tribune

When two Mayo Clinic Health System in Albert Lea and Austin pediatricians are in the exam room, they always bring guests: namely, Batman, Superman and Spiderman.

“If you show them you have something in common with them, it works,” pediatrician Vijay Venugopal said.

Patients in Albert Lea are both younger and older than in some previous experiences for the pediatricians. According to Olubaniyi, his experience with pediatrics in Nigeria meant patients younger than five. According to Venugopal, he sees fewer adult patients here than in Brooklyn (patients can see a pediatrician until they are 21).

But whatever the starting age, both pediatricians agree: working with children means getting to watch someone grow.

Venugopal said it’s not just the children, either, who grow. Children change the whole house, Olubaniyi said. They bring their parents and grandparents to doctor’s appointments. Venugopal said working with patients over time means a chance to see how the parents become more confident with their children and how the children grow up.

It also means getting to wear a Batman lanyard to work, or Superman and Spiderman keychains on your name tag.

But having those interest pieces are conversation-starters, Olubaniyi said, and the things they do — Batman lanyards included — are to make the exams easier.

Olubaniyi said he started in pediatrics just by giving it a try.

“A month into pediatrics, I just made up my mind — never go back to adults,” he said. Olubaniyi said he likes seeing the direct results of his work.

“Just by spotting the kid, you know if the kid is happy or sick,” he said.

Older children are also a great way to brush up on apps, music and slang, he said.

“It’s more fun to be a pediatrician than to be dealing with adults,” he said, laughing.

Outside of work, Olubaniyi runs daily around Fountain Lake. He lives in Albert Lea and enjoys mixing his own fragrances.

Venugopal commutes from Rochester. He likes to play and watch almost any sport, he said: soccer, tennis or basketball.