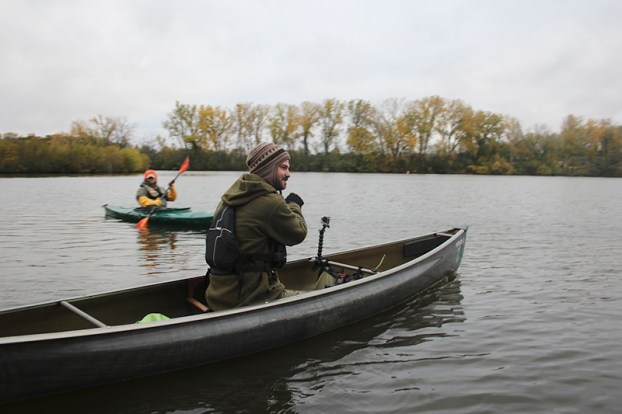 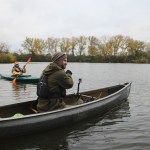 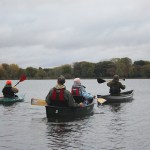 Jay Gustafson is canoeing in Albert Lea as part of a campaign to raise awareness of the need for water quality and care. He encourages other canoers to join him as he goes. – Sarah Kocher/Albert Lea Tribune 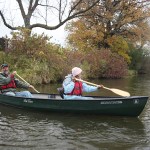 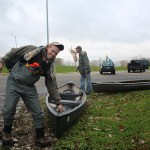 Gustafson, who also goes by “Waterway Jay,” has been steadily moving toward dipping his paddle into all 34 of the state-designated paddle trails. This goal is the manifestation of his passion for raising awareness on the issues facing water in Minnesota.

“I just think that the biggest thing with this is, you know, I’m not a scientist,” Gustafson said. “I don’t know what every solution is to every problem, but I think it’s important that people are just aware of what the problems even are.”

This year, Gov. Mark Dayton introduced the “25 by  ’25” campaign, which is intended to be a collaborative effort to improve water quality in Minnesota. However, Gustafson said the movement so far has not been making the progress hoped for.

“Even though there were some signs of improvement (at) this point, and that’s encouraging, it’s not enough to tip the scales in any significant way,” Gustafson said.

At current cleanup rates, the water is expected to improve in quality 6 to 8 percent by 2034. Additionally, Gustafson said over 600 listings were added to the 2018 Minnesota Pollution Control Agency’s 2018 draft report on Minnesota’s impaired waters. Twelve of those added listings are in Freeborn County.

“There’s way more than 34 rivers in Minnesota,” Gustafson said. “This is something that if we don’t try to take action now, if we don’t do something, you’re not even going to be able to recreate on them.”

Recreating on the Shell Rock River water trail is one of Jeff Renchin’s main concerns, and it’s why he said he joined Waterway Jay on Sunday morning’s canoe trip.

“It needs maintaining, and that’s why I’m here,” Renchin said.

The trail that runs through Albert Lea requires canoers to portage, and he said portaging over the dam is rocky and difficult to access.

“It’s new and needs work,” Renchin said. “And it’s stuff like this that helps it get done.”

“I’m excited to see what a very young water trail looks like in Minnesota,” Gustafson said before the trip.

“I would say that everybody has a part to play, and with everything you have from a water standpoint in Albert Lea, people need to ask themselves, ‘What if we can’t use these waters anymore?’” he said.

Gustafson began canoeing the 34 state water trails July 8, after telling his cousin on a canoeing trip that it was something he wanted to do. He came back from the trip around the same time Dayton was announcing  “25 by ‘25.”

“At the time, I didn’t really understand what I was saying or what I was trying to undertake,” Gustafson said.

He quit his job of 10 years after realizing, while teaching a course at his church on passion, that he wasn’t following his.

“I really came to understand that if I’m encouraging other people in this course to identify these things about themselves and then go out and use those things, then I should be doing the same thing,” he said.

The original plan was to complete all 34 trails by the end of the year, but Gustafson has extended his timeline. His goal for 2017 is to close out all of southern Minnesota.

“The logistics have proved a lot more difficult than I anticipated,” Gustafson said.

There is groundwork to lay before a canoeing trip can begin, people to get in touch with and rides to be organized so canoers can get back to their cars when the miles are completed.

“It’s been a whole host of combinations and different people that have helped me do this,” Gustafson said.

“It’s a big issue,” Gustafson said. “Obviously I love canoeing and I love being on the water … but this isn’t just some excuse for me to quit my job and canoe all day long. This is me trying to raise the alarm.”