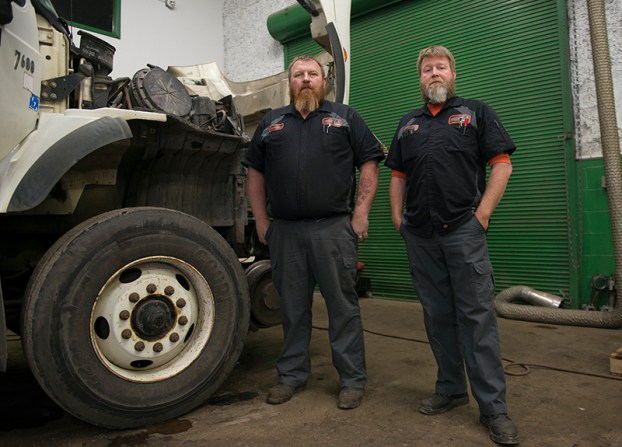 Harder than expected, but still worth it

When they opened up their business on May 5, the co-owners of Albert Lea Diesel and Chrome were looking to do two things. The first was to work for themselves. The second was major engine repair.

“It’s been an ongoing statement of mine for the last — at least a year, and that is, if you don’t like upper management, become it,” co-owner Tim Akemann said.

Before he struck out into the partnership with Akemann, Jeremy Hohansee was a service manager at a Peterbilt franchise in Clear Lake. Akemann was the owner-operator of a rental pilot car business until he walked into Hohansee’s Peterbilt looking for a job. That was a year ago.

“We went to lunch together one day and he said, ‘You’re gonna run the whole show because I’m out of here,’” Akemann said. “I said, ‘Where are you going?’ He says, “I got to figure out how to start my own business.’ I said, ‘Well, take me with you.’ A month later, we were a– -deep in the seriousness of doing it.”

Before Akemann and Hohansee walked into an empty building with one other employee in May, they were trying to keep their previous jobs while lining up the details for the move to their own company. According to Hohansee, it was a move they kept pretty close to the chest.

“We kept it from everybody until the day we walked in and said, ‘Give us the keys,’” he said. 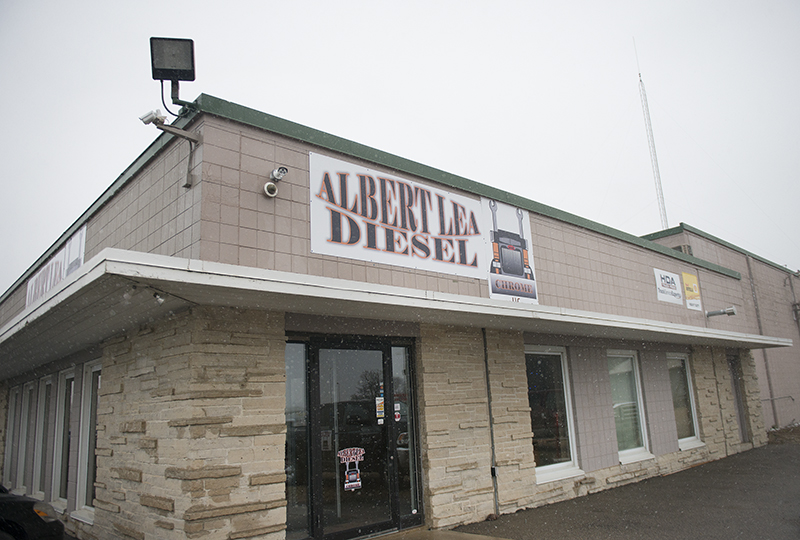 Now, there are five others working at Albert Lea Diesel and Chrome. Akemann and Hohansee said their customer base comes from people they know and word of mouth. They have been servicing vehicles out of Forest City, north of the Twin Cities and from Wisconsin, Oklahoma and Texas.

However, the co-owners said they have not seen the client influx they would like. The challenge is catching the attention of those who need Albert Lea Diesel and Chrome’s services.

“Our clientele is, we figure, the traveling market,” Hohansee said.

They are struggling to reach that market. The pair’s hope was that being close to the interstate would be a prime location for those passing through.

“We haven’t figured out how to break that barrier yet,” Hohansee said.

Nonetheless, Hohansee said their current clients do make their business sustainable. Akemann attributes most of this to who they know and what they say.

“We came here with quite a bit of clientele of our own, and they’ve got big mouths,” Akemann said.

One of their clients is Jeff Moore, a Glenville resident who owns a 2000 Kenworth semi truck. He already knew Akemann and Hohansee, and when his truck needed a fifth wheel and work on a u-joint, he brought it to Albert Lea Diesel and Chrome, 77783 209th St. in Albert Lea. Moore said the pair are “very particular” about how they fix equipment.

“The quality of work sets them apart,” Moore said. “Fixing a truck’s expensive, so you want it done right the first time. And these guys do.”

Hohansee said his family has had trucks all his life.

“I just kinda grew up around it, and if it broke, you fixed it,” Hohansee said.

Although they largely service semis like Moore’s, Albert Lea Chrome and Diesel also works on the occasional pickup truck and also sells and attaches accessories for semis, including wheels, pipes, lights and dash accessories. The company’s vision is to grow to 15 employees. And despite the challenges, Hohansee and Akemann both said they are glad to have started the business.

“There (are) no two days alike,” Akemann said.