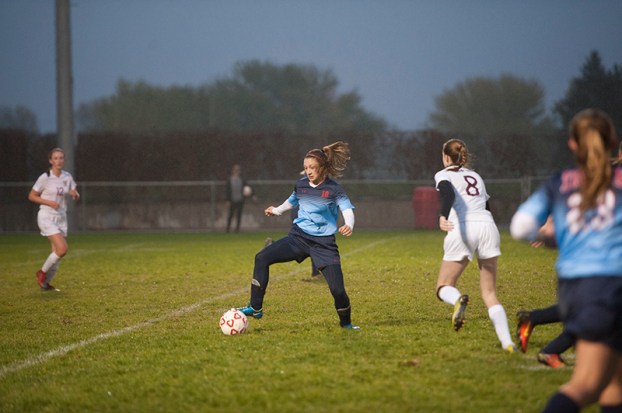 Albert Lea sophomore Turena Schultz controls the ball early in the first half against Northfield Saturday night. The Tigers would go on to lose the second round sectional game, 3-0. - Tyler Julson/Albert Lea Tribune 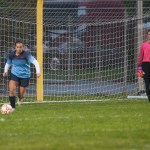 Albert Lea senior Ella Zelenak takes a free kick for the Tigers after a shot attempt from Northfield missed the target. The Tigers finished the season with a 7-8 record. – Tyler Julson/Albert Lea Tribune 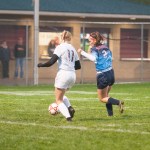 Albert Lea freshman Laura Flaherty plays defense against a Northfield forward Saturday night. After a slow start to the season, the Tigers rattled off five wins in a row to end the season 7-8. – Tyler Julson/Albert Lea Tribune 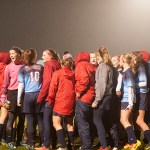 Albert Lea huddles together at halftime of their second round section match up against Northfield Saturday night. The Tigers would lose, 3-0 to the Raiders. -Tyler Julson/Albert Lea Tribune 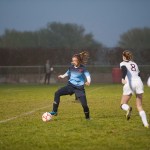 Albert Lea sophomore Turena Schultz controls the ball early in the first half against Northfield Saturday night. The Tigers would go on to lose the second round sectional game, 3-0. – Tyler Julson/Albert Lea Tribune

Despite a solid showing in the first half, the Tigers were unable to stifle the Raiders offense as they fell, 3-0.

After winning their first-round match in a penalty kick shootout, the Tigers came into Saturday riding a big wave of momentum and it showed throughout the first half.

Both teams had many goal attempts, but all were thwarted by the opposing goalies. Albert Lea’s sophomore keeper, Marissa Vogt, has been growing in the position all year, but really stepped up Saturday night. She had many great saves at the net to keep the Raiders offense at bay.

Albert Lea missed an opportunity midway through the first half when the Raiders goalkeeper left the net, but failed to secure the ball. However, the Tigers were unable to find the footing to drive the ball into the net. The match would go into halftime with both teams still scoreless.

Albert Lea was able to stick with Northfield for a few moments of the second half, but ultimately couldn’t keep up with the quick moving Raiders offense.

Northfield put the first goal on the board around eight minutes into the half on deep shot that just barely sailed over Vogt’s outstretched hands.

The Raiders would add two more goals before the match was over. One goal coming with 27 minutes left and the last one coming with around 15 minutes remaining.

Head coach Laura Wangen talked about the team’s season and the seniors after the match.

“Very proud of the effort by our team,” she said. “Impressed that we turned our season around and finished strong after the losing stretch we had in the beginning of the year. I’m proud and thankful for the time and dedication the seniors have contributed to the program. There’s a bright future for the program.”

After a dominating season opening win over Worthington, the Tigers lost their next six games. They would battle back, however, and win the next five games in a row and finish the regular season 6-7, earning a No. 10 seed in the section 2A tournament.

Albert Lea loses six seniors who will undoubtedly leave a hole in the lineup. However, there are many returning pieces and plenty of younger girls ready to step up and help improve the team next season.