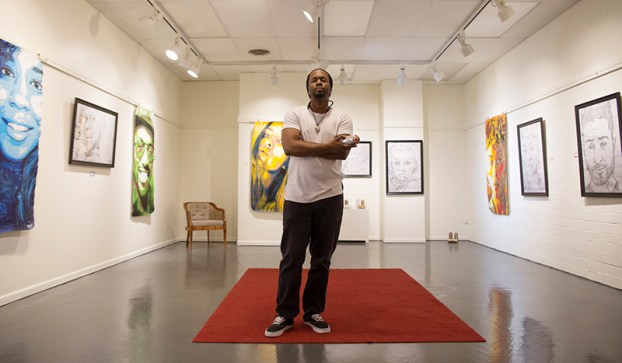 The Freeborn County Arts Initiative gallery has been transformed by Reggie LeFlore, an urban street artist, into an installation of colorful faces.

A reception was held last Saturday at the Arts Initiative for LeFlore, a Twin Cities-based artist.

LeFlore, who is originally from Omaha, is a self-taught artist that started out doing freelance illustrating.

“I eventually got to the point to where I was inspired by local muralists and some local graphic writers to transition what I know in the graphic design world into more tangible stuff,” LeFlore said. “I was influenced by the culture of street art and graffiti and whatnot.”

Once transitioned into more of a graphic artist, LeFlore continued to experiment with illustrations within his compositions.

LeFlore possesses a distinctive layering skill and makes dynamic color choices to create explosive drama in his work. The visiting artist often portrays political issues or issues of social justice in his art.

LeFlore takes existing shadows and highlights that he identifies in people’s faces, breaks down the highlights and shadows into shapes and transfers the shapes onto canvases.

For a while, LeFlore worked on pop culture pieces including stencils of “Breaking Bad,” “The Walking Dead” and popular musicians, among others.

“And then I noticed that there were other stencilists that were kind of doing the same thing, and I wanted to somewhat separate myself from the people that were just doing that,” LeFlore said. “I started adding various concepts to my work — you know — dealing with sexuality, nudity and how that is sort of a taboo subject in the visual arts.”

LeFlore has begun to focus some of his work toward certain movements such as Black Lives Matter. He started looking into doing community projects and large-scale pieces of work such as murals. LeFlore continued his work with stencils but on a larger canvas.

LeFlore said current events in the news have put his work into perspective and has sparked a desire to collaborate with other artists towards common goals. He is interested in working with others in the art world such as photographers, other curators and models. 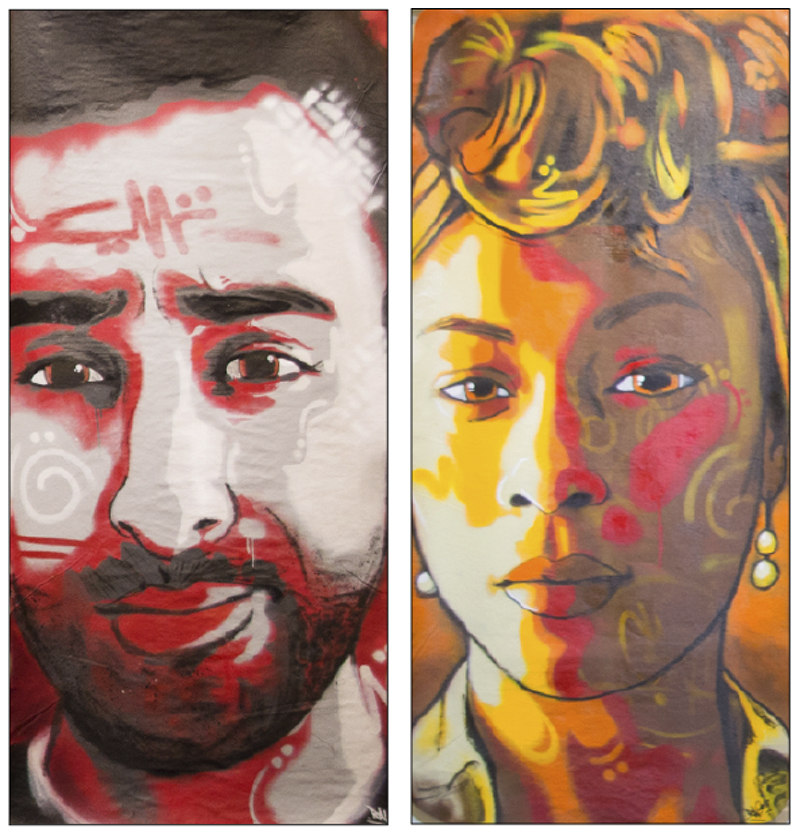 LeFlore called his current exhibit in Albert Lea a product of his recent collaborative efforts. The exhibit is named “Process: A series of technical and conceptual works by Reggie LeFlore.”

“‘Process’ kind of came from the definition — really just a series of actions or steps taken to a particular end,” LeFlore said. “And what is good about that definition is that it meant two things to me. First, it illustrated the technical aspect of my work. For the most part, (my work) is pretty rule-based, there are very set instructions that I give myself in order to make a piece of work.”

LeFlore said the exhibition in Albert Lea helped him outline the technical steps he takes in making his work, including taking drop cloths, priming the cloths, taking existing photos, breaking down the highlights and shadows, putting together a color scheme before getting all the paints and supplies and then actually combining all the listed methods to paint the final piece.

LeFlore then applies a variety of freehand drawing techniques to his work. Blends and strokes on top of the paintings help LeFlore achieve his desired depths, textures and contrasts for a final product.

“And then, as I am painting these pieces, I am also understanding the process of how I got to meet these (several) people,” he said.

The Freeborn County Arts Initiative gallery is filled with illustrations and aerosol paintings of people he knows.

“‘Process’ is dealing with kind of just how I built these connections with these people,” LeFlore said. “One of the people that I painted is a guy that actually influenced me to use aerosol. Another woman was someone that I collaborated with when I went to Hong Kong, and she was very inviting as far as allowing me to use her photos to create a mural project that was out there.”

LeFlore also included in his exhibit a painting of a model friend from Omaha that has been one of his biggest supporters along his journey as an artist. He said he included familiar faces of other supporters that are looking to create, but their day jobs get in the way of their passion.

“There is a whole big process to all of those connections and that is what I am kind of getting at. I just wanted to illustrate that and tell the story of all six of these people that I painted,” LeFlore said.

LeFlore, who has not taken a formal art class since high school, taught himself his craft through his own independent research, practice and experimentation.

As for the medium in which LeFlore works, he said aerosol, pencils and graphic design elements make up most of his compositions.

LeFlore moved to Minneapolis in 2015 with a friend enrolled at Minneapolis College of Art and Design. Before the move, LeFlore was invited to an event that helps locals and travelers meet.

At the event, he met Elisha Andrew Marin, a local musician and president of the Freeborn County Arts Initiative.

“I got around to kind of talking about what I am looking to do in the Twin Cities and one of the guys, Elisha, invited me to come out to his space,” LeFlore said. “We came out there to check out the space, and we kind of talked about the building that they are in and really just what they were looking to do in terms of using art to liven up Albert Lea.”

Marin and LeFlore made the decision to exhibit some of LeFlore’s art, although the execution of that decision did not happen for a year and a half. The time allowed for LeFlore to prepare and get comfortable in the Twin Cities.

The Freeborn County Arts Initiative is based in the historic Bessesen Building at 224 S. Broadway Ave. in Albert Lea. LeFlore’s “Process” gallery will be open from 1 to 4 p.m. Tuesdays, Fridays and Saturdays and from 1 to 7 p.m.

What: “Process: A series of technical and conceptual works by Reggie LeFlore” exhibit